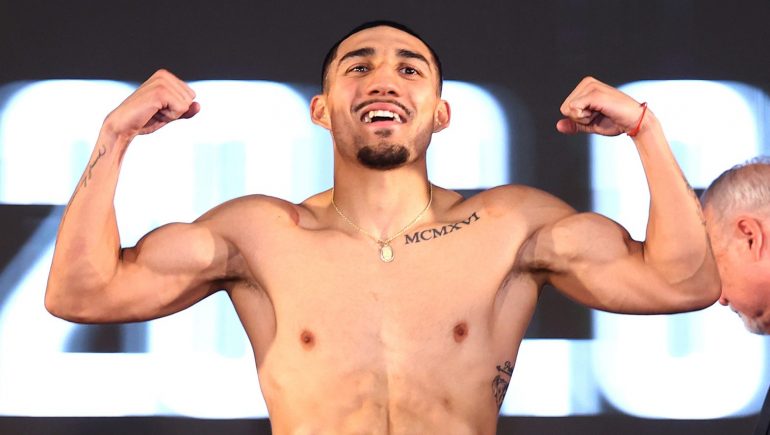 Teofimo Lopez flexes on the scale during the weigh in ahead of his NABF & WBO International junior welterweight fight with Pedro Campa, at Resorts World. (Photo by Mikey Williams/Top Rank Inc via Getty Images)
12
Aug
by Joseph Santoliquito

It’s been nine months since Teofimo Lopez Jr. last fought. “The Takeover” will try and erase the last time he was in the ring when he makes his junior welterweight debut Saturday night in the 10-round main event against tough Pedro Campa at Resorts World in Las Vegas on ESPN.

Lopez (16-1, 12 knockouts) lost for the first time in his career dropping The Ring world lightweight championship to George Kambosos in a stunning upset last November.

Making 135 was getting too hard for Lopez, who it was revealed soon after that he should not have been in the ring in the first place.

In a great piece of journalism, ESPN’s Mark Kriegel uncovered that “Teofimo Lopez was risking his life and should have been in a hospital — rather than a boxing ring — when he lost his four lightweight belts to George Kambosos last week at Madison Square Garden, according to a doctor who subsequently examined him and reviewed his medical records.

“He could have died, for sure,” Dr. Linda Dahl, an otolaryngologist (ENT) with surgical privileges at three Manhattan hospitals, told ESPN. “How he breathed, I can’t even explain to you. It’s like somebody tied a 300-pound set of weights around his chest … like his neck and chest were in a vise.”