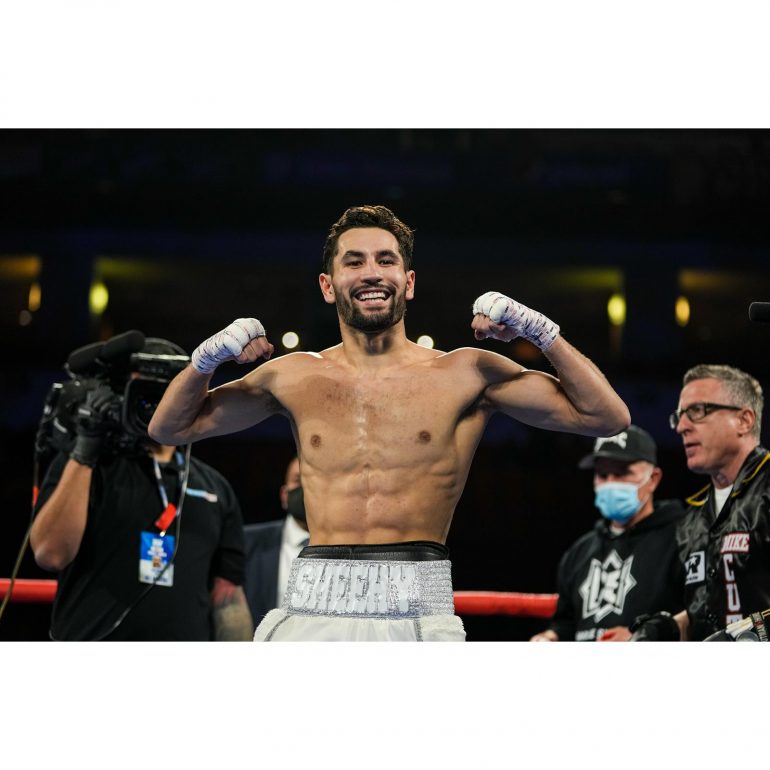 It’s a little hard to believe Charlie Sheehy is 23. It’s as if the Brisbane, California, lightweight has been around the boxing game forever. He amassed a 150-25 amateur record, including victories over Ryan Garcia and Vergil Ortiz. He looked like he was heading to the 2020 Tokyo Olympics when the COVID-19 pandemic derailed him.

As a pro, he’s started quickly, trained by Miguel Rios since he was nine, managed by Peter Kahn and promoted by Top Rank, Sheehy is 3-0, stopping each of his three opponents within the distance.

It will be another step in his learning process.

“So far with the pro game, the only difference has been with the smaller gloves, but I feel like the other side is way different,” Sheehy said. “In the pros, you have to assert your dominance, inflicting pain on your opponents, whereas in the amateurs, it’s more about points. As far as transitioning, I’ve working on my technique, trying to minimize my mistakes, and sitting down and turning over my punches.

This will be Sheehy’s last four-round fight before graduating to six-rounders.

Was it tougher to be an amateur than a pro just beginning?

“Because it is so early in my pro career, and I fought at such a high level as an amateur, I would say right now being an amateur was tougher for me because you have to fight a week-long in tournaments,” he said. “You’re fighting the best in the world every day. I’m fighting one four-round fight, as opposed to five three-round fights in a weekend, while moving up in competition and trying to keep your weight. You must make weight every day.

“I know Castaneda is a tough fighter who throws a lot of punches, and I know he’s coming,” Sheehy said. “He’s also undefeated. It should be a good fight. I’m ready.”

Sheehy is 5-foot-9 and making 135 has been relatively easy. Sheehy knows that will change as he gets older. Sheehy, who’s half-Filipino, half-Irish, lost his father. Rios has been like a second dad. He was there when Sheehy first put on gloves and got his nose bloodied.

“We’re in a great place right now and we have the full thrust of Miguel and we’re bringing Javiel (Centeno) in to help, but Miguel is the main man, and Charlie has a great background,” said Kahn, a two-time BWAA Manager of the Year nominee.

Rios sees Sheehy carrying more impact on his punches. He finds Charlie improving with each fight.

“All Charlie had to do was place in the top five of the last Olympic qualifier and he would have been on that 2020 team, and then the pandemic came and wiped those plans away,” Rios said. “Charlie been through the amateur grind. I like Charlie’s power. He’s starting to come into his man strength. We’re being patient and moving along.”