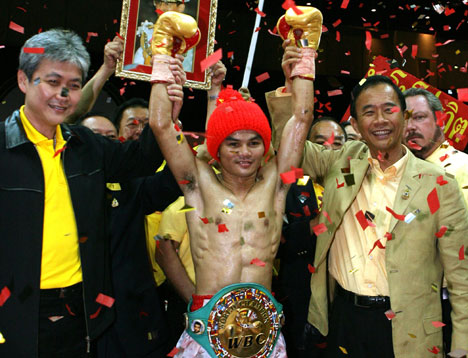 Thailand has produced an extraordinary number of great boxers in the lower weight divisions. One of them turns 45 years old today.

Former Ring flyweight champion Pongsaklek Wonjongkam was born August 11, 1977. In a career spanning 14 years in the 1990s and early 2000s, this native of Nakhon became a two-time lineal flyweight champion, defeating some of the best men of his day and defending his undisputed championship 17 times against 16 fighters, a record that still stands in the flyweight division.

Wonjongkam had a rocky start of his pro career, with two defeats inside his first dozen fights before he could avenge those losses (both to the same man) and move on. After defeating his previous conqueror, Filipino journeyman Jerry Pahayahay, Wonjongkam accumulated 55 consecutive wins, another record for his time.

After picking up a few secondary titles, Wonjongkam finally won his first championship belt when he knocked out Malcolm Tuñacao in the very first round for the WBC and lineal flyweight title on March 2, 2001.

He would later defend his belt against Japan’s Daisuke Naito in barely 34 seconds, another record for the fastest knockout in flyweight history. And by beating South Africa’s Monelisi Mhikiza Myekeni by unanimous decision in 2006, Wonjongkam set the flyweight division record for consecutive title defenses at 16.

After one more defense, Wonjongkam (rated at No. 10 in Ring magazine’s pound-for-pound list at that time) lost his belts to arch-rival Daisuke Naito in 2007, in the third bout between the pair. A fourth bout ended in a draw in 2008.

Nevertheless, Wonjongkam was far from done. He grabbed an interim belt that allowed him to put himself in position as mandatory contender to Koki Kameda, who had defeated Naito for the belt.  On March 27, 2010, Wonjongkam reclaimed his former glories when he picked up his old WBC belt along with the lineal recognition and the vacant Ring championship as well with a majority decision win over Kameda.

Two years later, Wonjongkam would finally lose his trinkets to Sonny Boy Jaro of the Philippines, in a stunning stoppage loss.Wonjongkam retired the following year after a demoralizing loss to a journeyman, returning to action briefly in 2018 to pick up the Thai national championship on his way to greener pastures. He is now a boxing trainer in his homeland.

A devastating, two-fisted pocket hurricane, Wonjongkam retired with an astonishing record consisting of 91 wins against only five losses, with 47 wins coming by way of knockout.