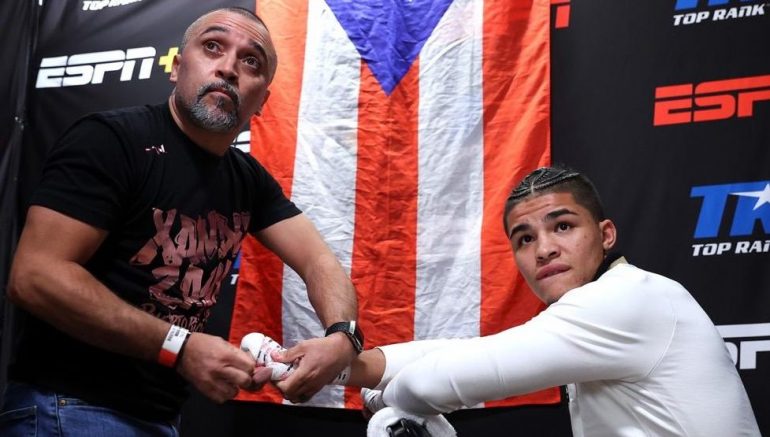 Javiel Centeno was sitting on a plane heading to Las Vegas in February 2003 with about 40-something amateur fights under his belt and well-armed with an architect degree from the University of Miami. Seated next to him was his mentor, legendary Hall of Famer Angelo Dundee. Somewhere maybe over Chicago, Dundee leaned into Centeno and was candid. He told Centeno that he liked his eye. He told him he knew talent. Hanging on the ropes, the iconic trainer saw how Centeno worked with the young amateurs in the South Florida Boxing gym, and above all else, Centeno was 30—too late to turn pro.

Dundee envisioned an alternative into boxing.

About 40,000 feet up, Dundee dipped his head, looked Centeno in the eyes, like the legendary trainers did, and suggested Centeno train fighters.

Centeno was a project manager for South American construction jobs when he was lured away from building buildings to building fighters.

He dropped a substantial and stable position in the architectural world to become one of boxing’s more unheralded trainers. 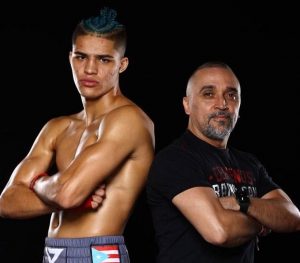 Trainer Javiel Centeno has a special relationship with budding prospect Xander Zayas, who been working with Centeno since he was 12.

Many of manager Peter Kahn’s fighters are trained by Centeno, who met Kahn through Warriors Boxing in Florida 20 years ago. Kahn and Centeno knew of each other through the South Florida boxing circuit. In 2003, Centeno’s wife happened to be Kahn’s banker at a local South Florida Citibank. Kahn noticed a picture of Centeno in the background, and he exclaimed, “Wait a second, that’s Javiel, I know that guy. I see him everywhere.” Centeno, who created the now defunct Fightwire Images, would see Kahn every time he visited the Warriors’ offices, trying to sell advertising.

The pair have since built an enduring trusting relationship.

“I believe in Javiel, because Javiel is a true student of the game, and his mentor was the great Angelo Dundee, who better can you learn under?” said Kahn, a two-time BWAA Manager of Year candidate, who represents both Zayas and Sheehy. “He learned strategy, game-planning, training, he learned all that under Angelo. Javiel is a brilliant guy. One of Javiel’s greatest assets is that he is a student of the game, with a high boxing IQ. He’s very disciplined.

“He has a very measured demeanor and when working with fighters, that’s so important. Javiel is able to adapt, according to the fighter he’s working with. He knows how to get the best out of each fighter. I trust him implicitly with my guys. I watched Javiel’s growth and development. Javiel understands how important it is to develop chemistry with his fighters. I think he’s the best trainer in the world. Other people in boxing need to take notice. Javiel doesn’t care about that stuff. I don’t either. I just like to see him get more respect.”

He didn’t need boxing. He was drawn to it. He was always working out and saw Dundee work with his guys. He immersed himself in the fundamentals. When the South Florida Boxing gym would close, he would drive Dundee home. The drives were like private tutorials, talking boxing, footwork, the nuances of training a fighter, and Centeno played the role of sponge, absorbing it at the steering wheel.

“I’ve always had such a passion for boxing,” said Centeno, who attended the School of Art Design High School in New York City. “I could have easily done something else. But it was what I liked, and Angelo was a big help. I learned so much from him. I love to see things grow. For example, I had Xander when he was 12 years old. It goes back to architecture. You’re building from the ground up. You find a product and shape it.

“It’s nice. The journey is longer than constructing a building. It takes time. It takes years, but it’s been such a pleasure to see this young man Xander grow. He’s special.”

Centeno now runs his own gym, Centeno’s Sweatbox, in Davie, Florida. It’s a one-stop shop, where a fighter gets training, and can do their conditioning. He used to train former NFL players and has streamlined that into a personal business of training solely fighters.

It’s an interesting life choice he made in 2003—going from the secure world of architecture to the chaotic world of boxing.

“I have no regrets,” he said. “It was a little scary, I’ll admit, in the beginning. I gave up everything and my wife and dad said the same thing, ‘Are you nuts?’ (laughs). But it’s very rewarding. We never struggled financially, and I have a very supportive wife. When it comes down to it, it’s rather simple: I’m doing something I love.”