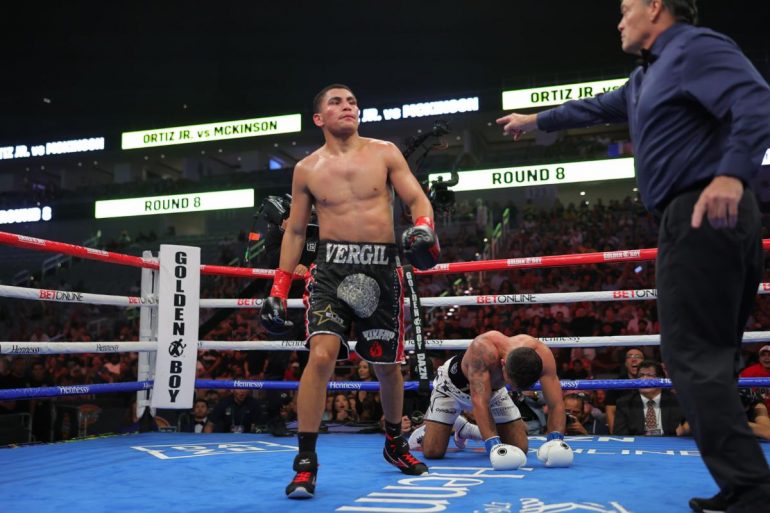 Welterweight contender Vergil Ortiz, Jr. overcame a slow start and the early movement of Michael McKinson to break down the British underdog and win by knockout in the early moments of the ninth round on Saturday at Dickies Arena in Fort Worth, Texas.

Ortiz, who resides in nearby Grand Prairie and is ranked No. 5 by The Ring, improves to 19-0, 19 knockouts.

From the opening bell, McKinson, who is known more for being a boxer and utilizing ring generalship, decided to stand in the pocket with Ortiz. The tactic worked as midway through the opening round, a left hook momentarily stunned Ortiz. Before the round concluded, an exchange between the two opened a cut along the left side of Ortiz’s eye. Referee Laurence Cole ruled the cut opened from an accidental clash of heads.

Ortiz looked rusty during the first couple of rounds as his timing was off and he would overstep his target, whether he would up in a clench with McKinson or entirely missing with a right cross or left hook.

Ortiz began letting his hands go with more aggression during the third round. He closed the distance and focused his attack to the body and throwing and landing uppercuts to the head. Ortiz finally began to find a rhythm as he also began cutting off the ring and forcing McKinson to stand and trade more in the pocket.

McKinson continued to fight, but his punch output would drop with each round. By the middle rounds, McKinson looked tired from exerting energy having to keep Ortiz away from him and from the effect of Ortiz’s punches, particularly to the body.

“I felt like I figured him out in the first round,” said Ortiz after the fight. “I finally started listening to my Dad (and trainer Vergil Ortiz, Sr.) after the first three rounds.”

Ortiz’s punches finally took their toll on McKinson. With less than 30 seconds left in the eighth round, a left hook to the body dropped McKinson to both knees. McKinson was able to beat the count and made it out of the round, but it was only a matter of time before the end of the fight would come.

“We knew we were going to start slowing him down,” said Ortiz, who is promoted by Golden Boy and managed by Rick Mirigian. “You don’t recover from those body shots.

Moments into the ninth round, Ortiz dropped McKinson with another left hook to the body. McKinson beat the count, but was favoring his leg, noticeably limping around the ring. His corner threw in the towel, prompting referee Laurence Cole to stop the fight at 27 seconds.

“Honestly, the first seven rounds, I didn’t do anything good,” said Ortiz. I didn’t listen to my corner. I finally did something right.”

Saturday marked Ortiz’s first fight since August 14 of last year, when he knocked out former WBO world title challenger Egidijus Kavaliauskas. Ortiz was scheduled to fight McKinson on March 19 in Los Angeles, but was forced to withdraw from the fight after he was hospitalized days before the fight. Ortiz was hospitalized and was diagnosed with rhabdomyolysis, which occurs when there is a breakdown of muscle tissue that releases a damaging protein into the blood. Symptoms include dark, reddish urine, a decreased amount of urine and muscle aches. Early treatment with aggressive fluid replacement reduces the risk of kidney damage.

Ortiz let his frustrations know after the fight.

“I definitely had a chip on my shoulder. Not necessarily towards McKinson, but all the people that were blaming you for something that you couldn’t control. It kind of sucks, mentally.”

With the win, Ortiz maintained his mandatory status for the WBO world welterweight title held by Terence Crawford, who was ringside in Fort Worth. Crawford, Ring’s No. 2-rated 147 pounder, has been mentioned in talks for a possible showdown with Errol Spence, Ring’s No. 1 welterweight, for the undisputed championship.

Whether the Crawford-Spence fight is made or not, Ortiz is ready for whenever that time comes to fight for a world title belt.

McKinson, who resides in Portsmouth, England, drops to 22-1, 2 KOs.