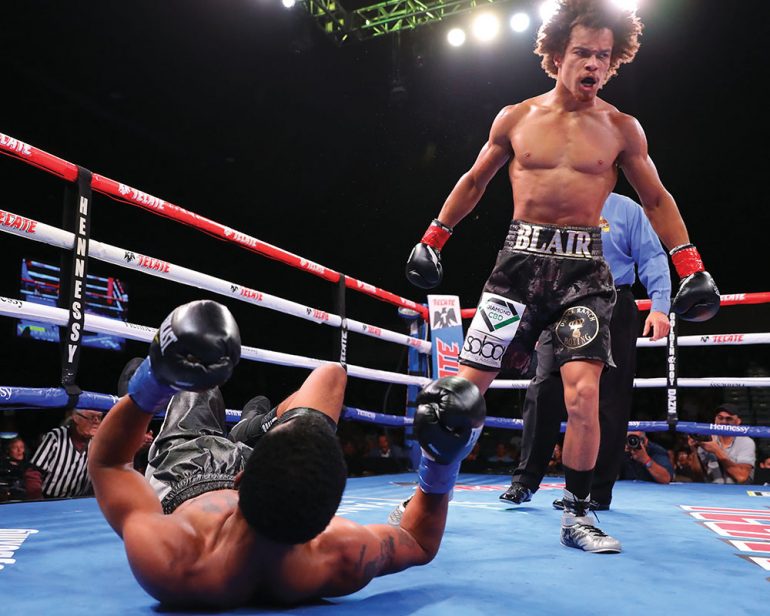 Blair Cobbs has an energy that leads to explosive action inside the ring and a flamboyant persona outside of it. The real drama is in his life story, though. (Photo by Tom Hogan/Golden Boy/Getty Images)
05
Aug
by Francisco Salazar

Blair Cobbs understood a change of scenery was needed to move forward with his career, especially after suffering his first loss as a pro.

Cobbs hopes to one day contend at 147 pounds because of these necessary changes, but he still feeds off of his ‘Blair the Flair’ persona.

Cobbs (15-1-1, 10 knockouts), who is originally from Philadelphia, Pennsylvania and now resides in Las Vegas, Nevada, was knocked out by Alexis Rocha in the ninth round of his last bout on March 19. Cobbs was coming off of a knockout win over former contender Brad Solomon on June 19 of last year.

The southpaw Cobbs will face a stiff challenge in Hooker, who lost the WBO world title to Jose Ramirez in July 2019 and was knocked out by Ortiz on March 20 of last year. Cobbs, who will face Hooker at a catchweight of 150 pounds Saturday night, expects a difficult fight in what he believes is a more-competitive fight than the main event.

“Anything is possible with the right discipline, training, and a good team behind me. Anything is possible. We have God on our side. What I see in Maurice Hooker is that he’s a terrific athlete and he’s going to show up (to the fight) with everything in his arsenal. He had more than enough time to prepare. More than enough time to get his weight down and I look forward to seeing him at his very best.”

Cobbs, who is promoted by Golden Boy, took a few weeks away from boxing after the loss to Rocha. He had to reassess his career and who he believed was best to guide him toward contender status.

Featured on DAZN as the second bout of the broadcast:

The 32-year-old believes the loss was a blessing in disguise, but he also believes he is in a much better position than Rocha, who defeated Luis Veron of Argentina in his last bout on July 16.

“There were plenty of things to take away from the (Rocha) fight,” said Cobbs, who is managed by Greg Hannley. “The fight was not necessarily a loss, but more of a learning (experience). I definitely need to keep my hands up and protect myself and stop left hands from coming in. Outside of that, most of that fight is really circumstantial. It’s a circumstantial loss. That’s why I took the fight without hesitation and, though it was three weeks of preparation, and I didn’t get the contract to actually fight him, and everything was kind of in the air until the day of the fight.  Let’s see what happens, if those circumstances are different. Most likely, the fight dynamic would be different. I tip my hat off to Alexis Rocha and his team, his trainer, because they came in excellent shape and well-prepared. But Blair ‘The Flair’ is here and I ain’t going nowhere.

A chance meeting with former heavyweight Adam Flores, who is now a trainer, led Cobbs  to relocate to Camarillo, California, which is located next to the boxing hotbed of Oxnard. He is now co-trained by Flores and brother Cecilio Flores, who used to be the strength and conditioning coach for Manny Pacquiao, Vasiliy Lomachenko, and Rogelio Romo, a former super middleweight fighter and the half-brother of Fernando Vargas.”

After working with all three trainers, Cobbs is pleased with the results throughout the training camp. Cobbs is grateful for the one-on-one attention, leading him to wish he would have reached out to them sooner.

“I was looking for some boxing material at a pro-fight shop,” said Cobbs. “I ran into Coach Adam and Coach Cicilio. They told me ‘you need to come over. We promise you’re not going to regret it.’ And I kept that in my mind. Again, I was continuously going through my ups and downs of trying to find a great team, trying to find a team that could take me to the promised land. That was before the Rocha fight. Eventually, I broke down and took the opportunity to see exactly what they have here in Camarillo. I was pleased to say that it’s the perfect fit and Blair ‘The Flair’ looks forward to working with this team from now on.

Blair "THE FLAIR" Cobbs ready for Saturday with a new attitude and energy – but still expect the same excitement in the ring!#OrtizMcKinson | Aug 6th on @DAZNboxing pic.twitter.com/QJHZFGOLNt

“What brought me out here was Coach Adam (Flores). We linked up. We saw each other while I was lost. I was lost in my camp, lost in my training, not knowing what to do. (I knew I needed) to make changes and big improvements in order to go against what I’m about to be facing.

“This is how God works. God works like that. If you don’t fix what is supposed to be fixed when God tells you to fix it, he’s going to put things in the way to make sure you fix it. He’s going to put you in a place where you have no other option. In that particular position, which is more of a blessing than a curse, I was forced to find my team. And find the right place for me. And the right place for me is in Camarillo.”

Cobbs understands he is the underdog going into the Hooker fight and people may have written him off from becoming a legit contender in a very deep welterweight division. He has remained steadfast in working towards his goals of going far in the sport.

He may not have liked losing to Rocha, but Cobbs believes everything happens for a reason. Now he is moving forward and is confident a win over Hooker can bring him to contender status.

“It’s just moving forward from here on out. I have to have a team that is 100 percent on Blair ‘The Flair’s’ team. I can’t wait to see what happens next.

“It’s not over. Blair ‘The Flair’ is still here. Never fear. The great one is here.”