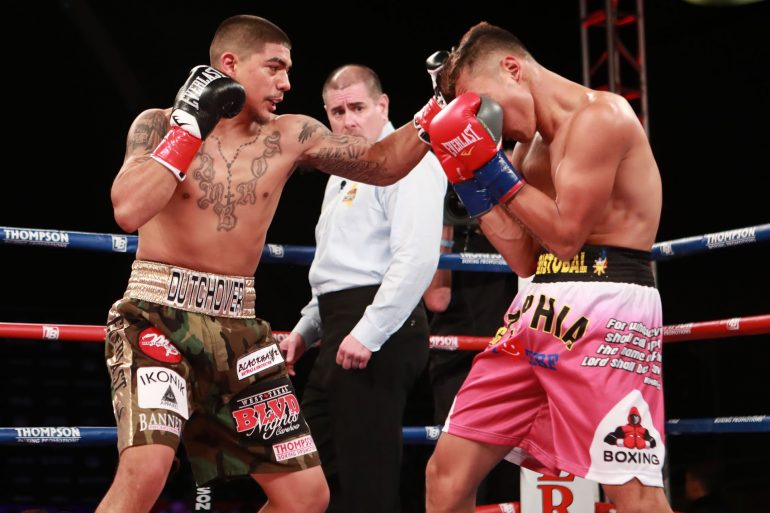 Michael Dutchover believes he is the epitome of the phrase “peaks and valleys.” Dutchover has suffered setbacks early on in his career, but is confident success in the form of becoming a legit contender and a shot for a world title lies ahead.

Dutchover will square off against Antonio Moran tonight at the Pro Box Events Center in Plant City, Florida. The 10-round bout is a semi-final bout of the ‘Last Chance Junior Welterweight’ tournament. In the other semi-final bout, also scheduled for 10 rounds, Kendo Castaneda will face Joseph Fernandez.

In his last bout on May 20, Dutchover (16-2, 10 KOs), who is originally from Midland, Texas and now resides in Santa Fe Springs, California, defeated Clarence Booth by split-decision. Booth was the more-effective fighter early on in the fight, but Dutchover was able to make adjustments to box his way to victory.

Dutchover suffered his second loss as a pro, losing by knockout to Nahir Albright on September 14 of last year. He lost by knockout to Thomas Mattice in September 2019 after the fight was stopped because of a cut over Dutchover’s eye that was caused by a punch.

The 24-year-old hopes to carry this momentum into tonight’s clash and is aware of the challenge Moran brings to the fight.

“This is a big opportunity for me,” Dutchover told The Ring Wednesday afternoon. “I’ve been doing this since I was eight years old. To me, this tournament brings back memories of when I was an amateur. You win, then you advance. This tournament format excites me. I’m very motivated.

“Moran is a great fighter. He’s an experienced guy. He’s been in the ring with Devin Haney and lasted with Arnold Barboza. He’s similar to me where we are both pressure fighters and throw a lot of punches. Nobody has seen my full potential as a fighter. I want Moran to bring the best out of me Friday night.”

A win over Moran would put Dutchover against the winner between Castaneda and Fernandez. That fight would take place later this year.

Dutchover may have dealt with setbacks, but believes he is on the right track to fulfill his dream of fighting for a world title belt. Now fighting as a junior welterweight, Dutchover is not struggling to make weight and feels stronger and faster.

“That’s always on my mind,” said Dutchover, who is co-promoted by Thompson Boxing and Banner Promotions. “I’ve had my ups and downs, but I get up and keep going. I don’t think I can be stopped. No matter what, I honestly believe I’ll be victorious and I can win this tournament.”

Dutchover, who is trained and managed by Danny Zamora, is moving on from past setbacks and is confident he learned to be a more-confident fighter.

“My will can’t be broken,” said Dutchover. “My whole life has prepared me for (tonight). I’ve seen wins and losses throughout my life and that has all come to fruition.