Born on this day: Gerry Cooney 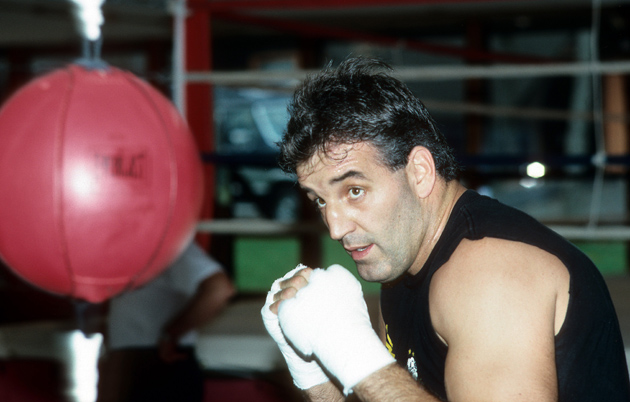 In any other era, he could have been a champion.

Unfortunately, it was written somewhere that he would have to put himself to the test against some of the greatest heavyweights who ever walked on Planet Earth.

Gerald Arthur Cooney was born August 4, 1956 in Long Island, New York. He had a successful career as an amateur in the Golden Gloves circuit before turning professional in 1977 under the guidance of Victor Valle.

Three years later, his imposing size and his demolishing left hook had earned him a following and a steady presence on televised cards across the US.

It was around that time that his career skyrocketed. In his first major step up in competition he defeated former contender Jimmy Young on a cuts-induced stoppage, and he followed up with two first-round knockouts over two respected heavy hitters like Ron Lyle and Ken Norton.

The spectacular stoppage of Norton under a barrage of punches only seconds into the fight earned Cooney a chance to fight for the heavyweight crown against Ring champion Larry Holmes, in what became one of the most heavily publicized heavyweight title fights in recent memory.

With a promotional effort heavily focused on the racial undertones of the fight, Cooney became the latest incarnation of the infamous “Great White Hope,” a name originally given to the man who would “return the heavyweight title to the white race” by taking it back from then-champion Jack Johnson in the early 1900s.

But just as the original owner of that moniker (former champion Jim Jeffries) failed to accomplish that task, so did Cooney.

The fight took place on June 11, 1982. Cooney was briefly knocked down in the second round and suffered three points deductions due to low blows, but that did not affect the outcome as the fight was stopped in the 13th round. Cooney’s trainer jumped into the ring to avoid a potentially more humiliating loss for the challenger, who thus failed to become the first white heavyweight champion since Ingemar Johansson in 1963. But not before becoming one of the best-paid challengers in heavyweight history, and with the added insult (towards Holmes) of being introduced after Holmes in the ring, an honor usually reserved for the champion.

The egregious disrespect for this time-honored protocol marked Cooney’s career, even though the fighter himself refused to play the “race card” during the promotion. He later befriended Holmes, and they remain friends today.

Cooney had three more fights in the next four years, and after another three-year hiatus he returned to face Michael Spinks for the title once again, this time being stopped in five rounds. Three years later, he had his final bout against former champion George Foreman, in what turned out to be an entertaining bout that ended with Cooney being stopped in the second round after rocking Foreman briefly in the first.

Cooney’s final record was 28 wins and 3 losses, with 24 knockouts. He is ranked number 53 on The Ring’s list of “100 Greatest Punchers of All Time”. His left hook was always his weapon of choice, and its uncanny accuracy was its main trait, for a simple reason: Cooney was left-handed but fought mostly from an orthodox stance, which gave much more power and precision to his left jabs and hooks, while his weak spot was always his stamina.

After his retirement, Cooney became an advocate for supporting and caring for fighters after their ring days are over. He also dabbled in boxing promotion, advocacy and activism against domestic violence, and other endeavors. He also hosts a boxing radio show. He currently lives in in Fanwood, New Jersey, with his wife Jennifer.