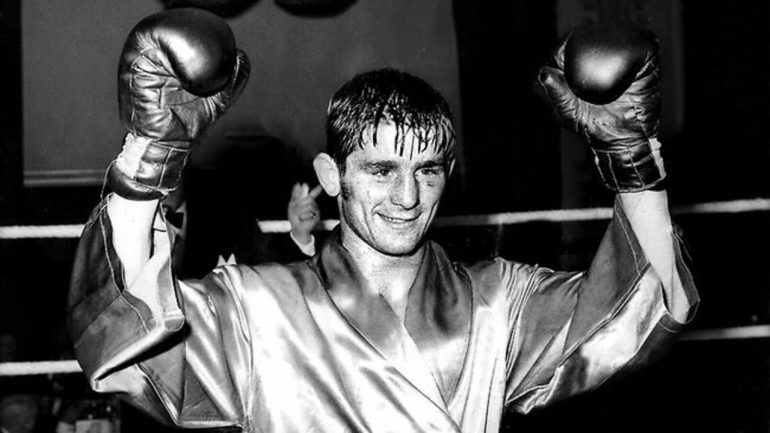 Famechon had long battled health issues pertaining to a car accident in 1991. Following a stroke, he was paralyzed on his left side. Although he spent a couple of years in hospital, Famechon was able to walk again after extensive rehab. However, in recent years, his health deteriorated.

Jean-Pierre Famechon was born in Paris in March 1945. He came from a boxing family; his father and four uncles won French national titles.

Two of the Famechon brothers were offered deals to emigrate and Johnny moved to Australia in 1950.

The youngster didn’t have an amateur career, but followed in his father’s and uncle’s footsteps by turning professional in 1961. He claimed Australian and Commonwealth titles on the way up.

However, Famechon is best remembered for traveling to London and unseating the excellent Jose Legra (PTS 15) for the Ring and WBC featherweight titles on January 21, 1969. When he returned home to Melbourne, 250,000 people lined the streets to welcome the new champion.

Famechon twice turned back the challenge of Fighting Harada (PTS 15/ KO 14). The scoring in fight one was highly controversial and led to the rematch. On that occasion, “Famo” made sure there was no doubt and dominated the Japanese hero.

In May 1970, the Australian resident lost his title to Vicente Saldivar (UD 15) in Rome. Although he was only 24 years old, Famechon never fought again and retired with a record of 56-5-6 (20 knockouts).

In retirement, Famechon remained a popular figure in Australian sports circles. A bronze statue of him was unveiled at Ballam Park in Frankston, Melbourne, to commemorate his achievements in 2018.

Last year, Famechon was awarded the highly prestigious Member of the Order of Australia (AM) in the Queen’s Birthday Honours list.

Famechon is survived by his wife Glenys, two children from his first marriage, and five grandchildren.