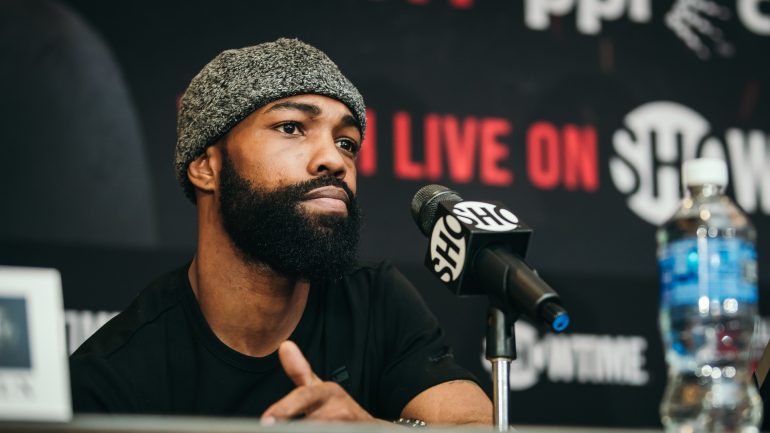 Former WBC featherweight titleholder Gary Russell Jr. was in the corner of younger brother Gary Antuanne Russell for his sixth-round stoppage win over former two-division titlist Rances Barthelemy on the Danny Garcia-Jose Benavidez Jr. undercard at the Barclays Center in Brooklyn on Saturday.

Russell, who is the eldest of three active fighting brothers, was largely happy with how things played out.

“I thought he got the job done,” Russell Jr. told The Ring. “I thought he executed the game plan, but not completely to my liking.

“He’s 26 years old, he’s still maturing and growing. I think, ultimately, it was a good win for him and it’s going to catapult his career.”

However, Russell agrees with the general consensus that the stoppage was early. However, he can also see why referee Shada Murdaugh curtailed the fight after the Cuban was dropped.

“I do somewhat agree the stoppage was premature, but, at the same time, it’s at the referee’s desecration to stop the fight,” Russell said. “There’s a lot of guys in the sport of boxing dying because of head trauma. Maybe that was fresh on the ref’s mind. He has a closer look than everyone else.

“My brother had ample time in that round to close. It was almost inevitable he was going to get him out of there.”

The victory saw Russell, who has a perfect 16-0 (16 knockouts) record, move up to No. 7 in The Ring’s 140-pound ratings. It solidified his status as one of the top young contenders in the deep junior welterweight division.

The Russell-Barthelemy bout also marked the first time that the boxing brothers would be without father-trainer Gary Russell Sr. The acclaimed coach tragically passed away due to complications from Type 2 Diabetes on May 23.

“It was the first fight we had without my father being in the corner,” said Russell Jr. with a heavy-heart. “I’m a firm believer that energy is transferrable. He wasn’t here in the flesh, but I definitely felt his energy and aura all around us that night.”

In a quiet moment after the bout, Russell shared his wisdom with baby brother.

“I told him good job,” said Russell Jr. “I know pops proud, but, at the end of the day, we’re perfectionists. We’ve got shit we’ve got to work on. I’ll give you a C. He agreed.”

Antuanne Russell is expected to return in the fall. He will have world titles in his crosshairs in 2023.