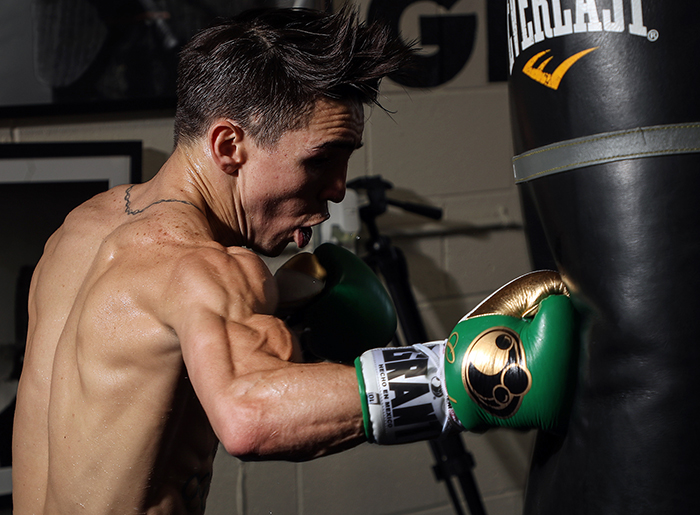 Michael Conlan returns to action this weekend in his first outing since a Fight of the Year contender defeat to Leigh Wood.

Conlan got off to a quick start, dropping Wood in the first, but Wood began to come back and in the final round dumped Conlan through the ropes to win with barely 90 seconds of the bout remaining.

Although plenty look on the bright side of that bout, and even in defeat Conlan entered The Ring’s top 10, Conlan was devastated. He went into his shell and went away with his family.

A few months on, and he can see the positives of the fan reaction to the type of contest it was.

“It’s nice to hear it,” he said, of the fact people had been entertained. “It’s nice to see, to get that kind of respect in defeat. The Fight of the Year contender doesn’t mean nothing because I lost. That annoys me more than anything. I would have rather been in the most boring fight of the year and won than be in the most exciting fight of the year and lose. But with people saying my stock has gone up, I understand that but at the same time I already knew my own abilities, but it is nice to get it from the outside.”

Conlan is back in tough this weekend, facing Mexican Miguel Marriaga, a man he’s familier with. Conlan spent a lot of time in California when he turned over and he was there the night Marriaga fought his old stablemate Oscar Valdez.

“I think he’s a dangerous guy,” admitted Conlan. “I’ve watched him for a long time. He fought my old stablemate Oscar Valdez and I was at that fight in California in Carson and what a fight that was. We know how tough he is. Oscar can punch really hard and he didn’t take him out. Lomachecnko made him quit but that was because of how good Lomachenko is and he’s been in with the likes of Nicholas Walters and he’s given them all wars. He hasn’t been an easy fight for any of them really – bar Lomachenko probably – but he’s a tough guy, he comes to win. He’s going to see I’m just off my first loss, a Top Rank guy who he can go in and upset and he will come in with a lot of confidence. He’s a good fighter, he’s a smart guy, he knows how to fight and can keep himself safe in there, so I’m looking forward to it.”

Often-times, trainers are blamed for defeat but Conlan said there was never any chance he would look beyond returning to Adam Booth following his first loss.

“Not a chance in hell,” Conlan said. “When you watch everything me and Adam were working on, there was steady progression in every single fight. You could see the improvements every time. You could see the things we were working on and them starting to play out and even in that [Wood] fight, the mistakes I made are things he’s been shouting at me for for a long time and things I’ve been getting away with. Everything that has happened, good and bad, has played out, so I have full faith in Adam and I think he has full faith in me with the stuff we should have corrected and the stuff he was trying to make me correct. It was silly, silly little things that caused the ending of the last fight but everything we’d been working on until that, the southpaw stuff, the orthodox, everything showed out and it’s made our relationship even stronger. It’s rare that can happen, especially in losses, but with me and him I think it’s been fantastic. I wouldn’t change it for the world.”

Initially there was talk of a rematch with Wood, but Wood has now rumoured contests with Mauricio Lara or Leo Santa Cruz as possibilities and Conlan cannot afford to look beyond this Saturday at the SSE Arena in Belfast.

“I don’t know,” he said. “It has to make financial sense no matter what and if he’s still a champion and the fight is still big enough… Even if he’s not a champion it still has to make financial sense, because I don’t think he will hold on to the belt for much longer. I think if he fights Santa Cruz, he loses. If it can make sense yes, it can happen. But do I think they want it to happen? Not really. I think they’ll probably use it as a fallback fight if they lose the world title they think they will have the rematch, but it has to make sense for me as well.

“I’m not an idiot but at the same time I know my worth and they know the worth of that fight and if they think it’s a fallback fight where I get paid buttons and he’s going to get paid an alright bit of money, they can go f*** themselves. I want to get it back and I want to win but I’m a business-minded person too, so I’ve got to be smart.”