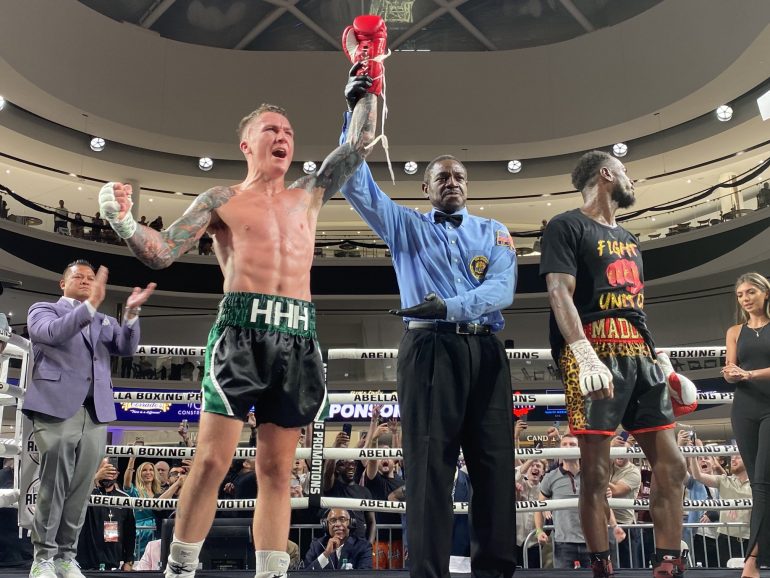 EAST RUTHERFORD, N.J. — Harley Burke entered Friday’s bout with six fights under his belt, but this one he says felt like his actual pro debut.

For the first time as a pro, Burke was fighting in his home region, in front of his supporters. It was his first time to see the second round since he was an amateur, and he ended up doubling his total rounds as a professional in a single night.

To add more pressure to the night, Burke was elevated to the main event slot after local star Julian Rodriguez’s bout was canceled after his opponent was unable to obtain a visa to enter the country.

Burke outslugged tough journeyman Brandon Maddox to a six-round unanimous decision win at the American Dream mall by the scores of 59-55 on two cards and 58-56 on the third.

“I grew ten years in here tonight,” said Burke (7-0, 6 knockouts), whose previous bouts had all ended in first round knockouts.

The 27-year-old super middleweight prospect from Yonkers, N.Y. by way of Galway, Ireland had built his record in South Carolina and Virginia, and was stepping way up in competition against a Detroit native who had gone the distance with unbeaten prospect Nikita Ababiy.

The 36-year-old Maddox (8-6-1, 6 KOs) started fast, testing Burke with a quick pace that put him on the defensive. Burke fired back, landing with lead hooks that put Maddox on the defensive. Burke’s power kept Maddox in survival mode for most of the fight, but Maddox was able to get through the rounds as Burke followed him around instead of cutting off the ring.

Burke’s crowd, which consisted largely of Irish fans, kept their fighter motivated by singing Irish soccer chants. Burke appeared to stun Maddox one final time in the sixth round to punctuate the bout.

“The third round I started feeling it but this crowd made me dig deep and go for it,” said Burke, who is trained and managed by Ryan O’Leary.

Burke says he doesn’t know when he’ll be back in the ring, but he knows he has to get back into the gym as soon as possible to continue his momentum.

“I usually go on a three month bender [after a fight] but I gotta be back in the gym in a week,” said Burke. “But I’m gonna enjoy myself tonight.”

The Burke-Maddox fight headlined the second event promoted by Abella Boxing Promotions, and the first ever boxing event hosted at the country’s second biggest mall.

From one knockout streak ending to one possibly beginning.

Robert Terry showed the power that had been evident in the amateurs but had been fleeting in the pros, scoring his first knockout over Isiah Seldon.

Terry (7-0, 1 knockout) of Jersey City, N.J. bombed Seldon to the canvas with an overhand right in round one before pummeling him to a second round stoppage in their six-round junior middleweight bout.

Terry, 29, said the secret to his devastating form tonight was that he stopped being laid back and started fighting with mean intentions.

“I like boxing but when I turn into something else, everything goes dark,” said Terry, a 2017 National Golden Gloves finalist who is trained by Bobby Rooney Jr. out of the Bayonne Recreation Boxing Gym.

Seldon may have been just what the doctor ordered: the loss is his fifth by knockout, and fourth in his last five bouts dating back to 2019.

The win was a much needed one for New Jersey fans after back-to-back losses from local favorites.

Miranda Barber (3-4) of Boca Raton, Fla. outworked Jenna Gaglioti (3-1, 2 KOs) of Jersey City, N.J. in their four-round women’s junior middleweight bout. All three judges scored the bout 39-37 for Barber, who spoiled the homecoming of Gaglioti, a New York native whose three previous bouts had been in the Dominican Republic.

Barber, 28, had been battle-tested in her short career, having gone the six round distance against former title challenger Maricela Cornejo.

That fight was followed by Keon Ivery (1-2) of Lodi, N.J. losing a bloody unanimous decision to tough Mexican brawler Dario Guerrero-Meneses (1-2-1) in a four-round middleweight bout. Ivery suffered two serious cuts – one on the hairline and one above his left eye – which covered his face in blood in a manner that evoked memories of Badou Jack’s notorious cut against Marcus Browne.

The loudest crowd of the undercard came in the four-round matchup between lightweight debutants Saleh “Habibi” Ali and Carlos Nunez. Ali, a popular Palestinian-American businessman who owns Ape Kingdom Boxing Gym in West New York, controlled the opening rounds with his heavy right hands and body punches, but was met with vociferous return fire from the determined Nunez.

One judge scored the bout 39-37, while the other two turned in scorecards of 38-38 for a majority draw verdict. 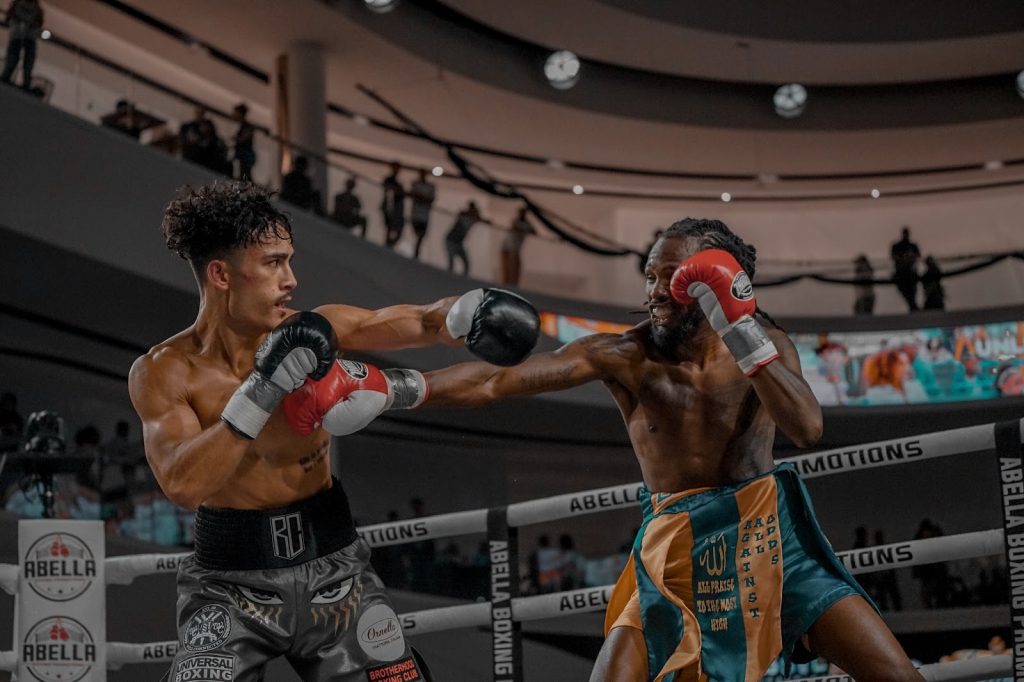 Ray Cuadrado (4-0, 1 KO) used effective aggression to break down tricky southpaw Andrew Bentley and win a unanimous decision in their junior lightweight bout. The scores were 40-36 on two cards and 39-37 on the third.

Cuadrado, 26, of Ridgewood, N.Y. built tempo after a slow start, forcing Bentley (5-6, 1 KO) of Irvington, N.J. to mix it up more than he was comfortable with.

Cuadrado had to walk through a straight left here and there, and found better success later on after he begin throwing 3-4 punch combinations instead of one punch at a time.

“He’s a veteran in the ring compared to me. So when I noticed that he was just trying to survive, we just wanted to make sure we won in fashion,” said Cuadrado.

Elijah Williams (3-0, 2 KOs) of Newburgh, N.Y. sank the impossibly tough Joey Aquino (2-2, 2 KOs) in the fourth and final round, dropping him with a body shot to force a referee’s stoppage at the 1:02 mark of the junior welterweight bout. Aquino of Pahoa, Hawaii absorbed a tremendous beating, and showed no signs of retreat until the final flurry.

The 19-year-old Williams sustained his first cut as a pro, a nick under his right eye, but showed no ill effects as he targeted his jab on Aquino’s immobile head. Williams showed he was equally comfortable staying on the inside to bang as well.