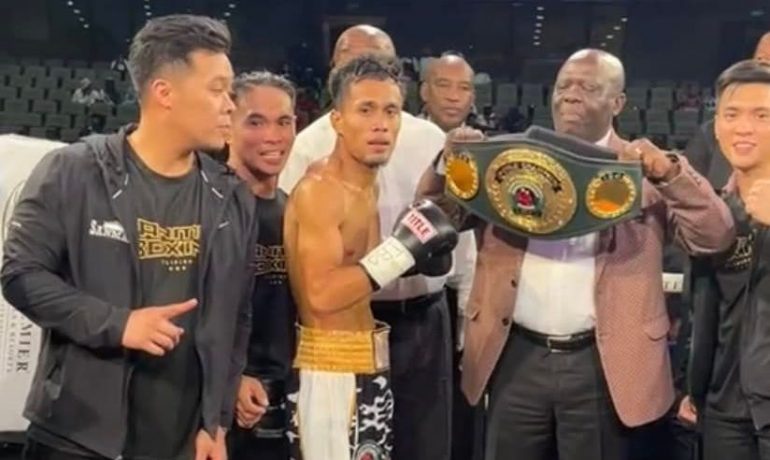 Apolinario (17-0, 12 knockouts) showed he was ready for the massive step-up in competition, dropping his fellow southpaw with a left cross before missing with a wild clean-up right hook. Buthelezi (23-6, 5 KOs), who is 13 years older than the 23-year-old Apolinario, appeared to pick up the count at four, but remained on a knee until the count reached ten.

Apolinario of Sarangani province in the southern Philippines, was fighting with a heavy heart, having dedicated the fight to his mother who died three months ago.

With the win, Apolinario claims the minor IBO flyweight title. Known as the “Dobermann,” Apolinario is promoted by Sanman Promotions, which is headed by Jim Claude Mananagquil. He’s trained by Ronerex Dalut out of the Sanman Gym in General Santos City.

“We knew he would KO him. It was just a matter of time,” said Manangquil.

“We’re gonna celebrate and work on bigger things next.”

Filipino Dave "Dobermann" Apolinario (17-0, 12 KO's) goes to East London, South Africa and knocks out Gideon Buthelezi (23-6) in the opening round for a KO-1 victory to claim the vacant IBO flyweight title pic.twitter.com/tJUPVjLtQ6

The younger brother of former pros John Mark and Paul Apolinario, Dave Apolinario had been a top amateur as a junior, winning gold medals at the Philippine National Games and Palarong Pambansa tournaments before turning professional at age 18.

The win should boost Apolinario’s rankings with the sanctioning bodies, given that he entered the fight rated no. 6 by the WBA, no. 10 by the IBF and no. 15 by the WBO at 112 pounds. Buthelezi was rated no. 14 by the WBC at junior bantamweight.

Buthelezi, whose biggest win was a split decision over Hekkie Budler in 2011, had challenged for a world title in 2011, losing by second round knockout to Adrian Hernandez for the WBC junior flyweight title. The loss is the second time a Filipino had knocked out Buthelezi in the first round, having been flattened by Edrin Dapudong in 2013 in another bout for the IBO junior bantamweight title.

The loss snaps a nine-fight winning streak for Buthelezi that goes back to 2015.