Claressa Shields says she has nothing to prove against Savannah Marshall: ‘I’m already better than her’ 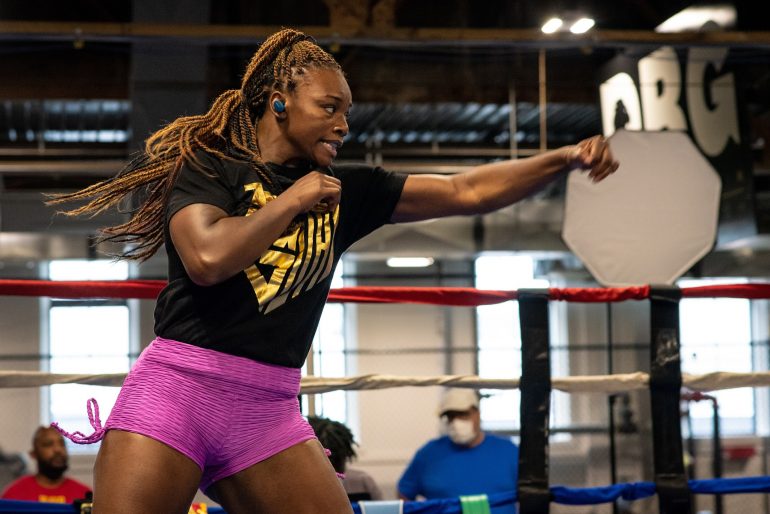 Claressa Shields is expected to face her toughest challenge yet as a professional on September 10 when she faces the only woman who had ever beaten her in the amateurs.

If you ask Shields, she says she feels she has nothing to prove when she faces Savannah Marshall at the O2 Arena in the London suburb of Greenwich.

“I’m already better than (Marshall). I already have big accomplishments, gold medals, the wins and everything. It’s not really about her. Yes, she’s a good fighter and everything, and she holds one belt, but I hold 12,” said Shields, a two-time Olympic gold medalist who has won titles up and down the scales from 154 pounds to 168 pounds.

“I don’t think about her when I’m training.”

Shields (12-0, 2 KOs), who holds the IBF, WBA and WBC middleweight titles, addressed the media at a public workout Wednesday in Detroit to promote her women’s boxing summit showdown with the WBO middleweight titleholder Marshall (12-0, 10 KOs).

Shields says she doesn’t lose sleep over their 2012 fight, which Marshall won by a 14-8 score.

“That really doesn’t bother me at all because I’ve been able to be successful after that. On the other hand, you’ve got (Marshall) who lost every tournament she was in after our fight, and in those same tournaments I won gold,” said Shields.

“So having one loss in the amateurs and being able to turn pro and do everything that I’ve done since, I don’t really care about (that loss). But I think it’s a great story and storyline, and I guess we’ve got history.” 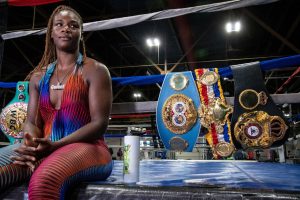 Shields, who hails from Flint, Mich., is doing some things differently for this bout. She says her typical training camps last six weeks, but she has nearly doubled this camp to ten weeks. She began camp in Michigan, and will finish up in Florida, away from the distractions of friends and family.

Marshall, who is four years older than Shields at 31, has lived up to her nickname of the “Silent Assassin” in the build-up to the fight, while the verbose Shields has worked to build the fight up in the media. Shields says that Marshall’s unwillingness to engage in trash talk has surprised her.

“I was thinking she would have more energy and more spite. But when we were face-to-face she tucked her tail, and that just showed me right there that she didn’t want this fight. She knows she’s not going to win this fight,” said Shields.

“I saw her do an interview where she had a black eye. So they’ve been trying to put her through all kinds of stuff in sparring to make sure she’s ready. But the truth is she’s lightyears behind me.”

Both have been dominant so far in their early runs through the sport. While Shields has just two knockouts as a pro, with the last being a fifth round stoppage of Nikki Adler in 2017, Marshall hasn’t had an opponent go the distance with her since her fourth pro bout in 2018.

Marshall is coming off a statement-making third round knockout of Femke Hermans in April.

Shields says that those displays of power haven’t impressed her.

“Marshall has fought a whole bunch of tomato cans. She might be 12-0 with 10 knockouts, but if you go and look at her record, the majority of those girls had losing records. You’re supposed to knock them out on three days’ notice, or a week’s notice,” said Shields.