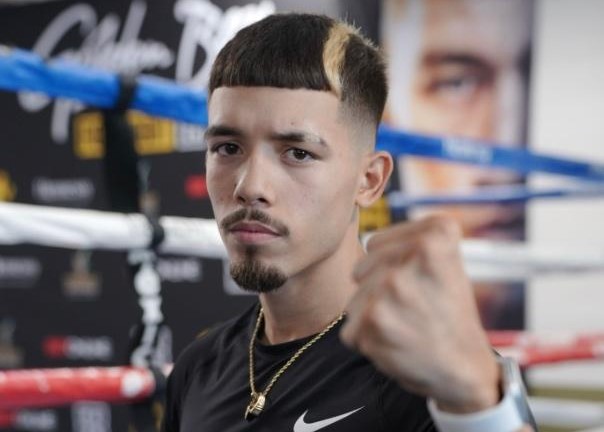 Manuel Flores believes he can not only add to the great legacy of fighters listed above, but also create his own path to stardom.

Flores will face Daniel Colula on Thursday night at the Fantasy Springs Resort Casino in Indio, California. The eight-round junior featherweight bout will precede the 10-round main event bout between lightweights Jousce Gonzalez and Jose Angulo.

Both fights will headline a Golden Boy Fight Night on DAZN card, which will stream live (9 p.m. ET/ 6 p.m. PT).

The southpaw Flores (12-0, 9 knockouts) won by knockout in his last bout on April 21, dropping gatekeeper Victor Ruiz three times before ending matters in the third round. The win over Ruiz was Flores’ first fight in Indio, which is about a 10-minute drive from his hometown of Coachella.

Another large turnout is expected to watch Flores in action on Thursday. Flores says those watching him fight in person are not those who live exclusively in and around his hometown, but he is grateful so many are willing to cheer him on in person.

“I’m so grateful to fight in my hometown,” Flores told The Ring over the phone Tuesday afternoon. “I get to showcase my skills to family and friends. I also have people coming from Los Angeles and San Diego to watch my fight. I’m blessed with the fan case I have and I’m looking to continue to grow that fan base here in the (Coachella) Valley.

“To have people come up to me to say hello or that they watched my fight is motivating and it makes me go that much harder (in the gym). My family and fans believe in me. It’s beautiful and gratifying.”

Flores has fought within and around the bantamweight limit since making his pro debut in June 2017. The contracted weight for the fight against Colula is 120 pounds, plus one.

Flores will face Colula (15-6-2, 5 KOs), who lost his last bout to unbeaten Hector Valdez on April 23. The 29-year-old from Mexico City has split his last six bouts, which includes a unanimous decision loss to former world titleholder Anselmo Moreno.

While some may look at the 23-year-old as a prospect, Flores believes he is on his way to becoming a legit contender at 118 or 122 pounds.

“I feel like I’m becoming more of a contender after each outing,” said Flores, who is co-trained by Joel and Antonio Diaz. “I’m coming up in this game. I’ve faced tough guys thus far and I’ve passed every test.

“Colula is a durable guy. I think he’s only been stopped once or twice in his career. I’m confident that I can get the win by knockout in this fight.”

Flores has benefited from top sparring as the Coachella Valley has a handful of gyms where some of boxing’s most talented fighters train, including junior bantamweight contender Roman ‘Chocolatito’ Gonzalez and IBF/ WBA unified junior featherweight titleholder Murodjon Akhmadaliev.

In recent months, Flores has sparred Akhmadaliev and other top contenders and prospects, sharpening his skill-set.

Flores has benefited from Joel and Antonio Diaz, and believes the guidance and teachings he receives from him will benefit him in the long run, whether it is making a run at a world title at 118 or 122 pounds.

“I’m blessed to have them as coaches. We come from the same area as they also grew up in Coachella. The wisdom I receive from them is out of this world. I’m on a path to becoming successful because of the pedigree I receive on a daily basis.”