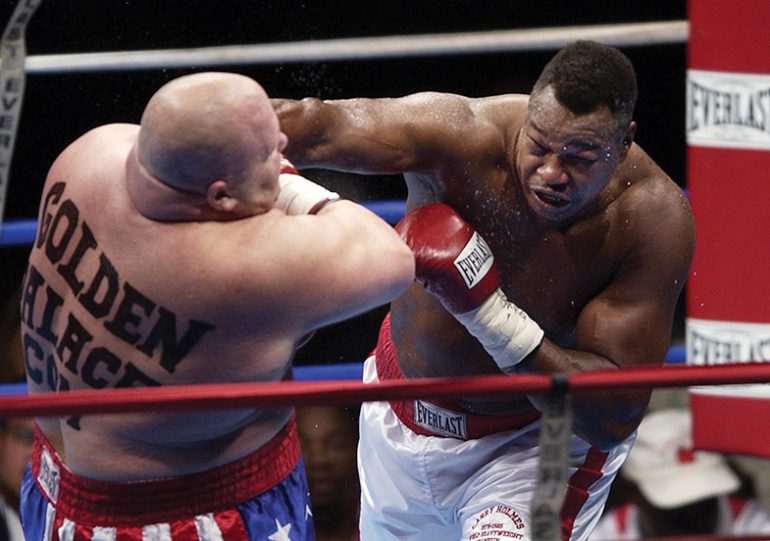 It was a novelty and both men were paid well.

On July 27, 2002, former heavyweight champion of the world Larry Holmes closed out a brilliant 29-year professional career by outclassing the 334-pound Butterbean over 10 rounds at the Scope Arena in Norfolk, Virginia. The official scores were 98-91, 97-92 and 96-93.

The 52-year-old Holmes had been inactive for 21 months and gave away 80 pounds in weight. However, the ex-champ’s rapier left jab remained serviceable and he controlled the vast majority of the bout with that one punch. The only time Butterbean saw the jab was when it was on the way back to Holmes’ hip area.

Occasionally Holmes released the right, but he kept things fairly simple. The double jab, the one-two, the one-one-two – these simple combinations worked wonders. Holmes would score, take a walk, reset and repeat. All Butterbean could do was walk forward and pray for the go-home punch.

It never came, but there was a moment of drama in the closing seconds of the 10th. After scoring another one-two, Holmes caught a glancing left that sent him stumbling back into a neutral corner. Referee Chris Woolesen ruled a knockdown, but it was all academic. Holmes was miles ahead on points.

Butterbean, “The King of the Four Rounders,” was a pauper over 10.