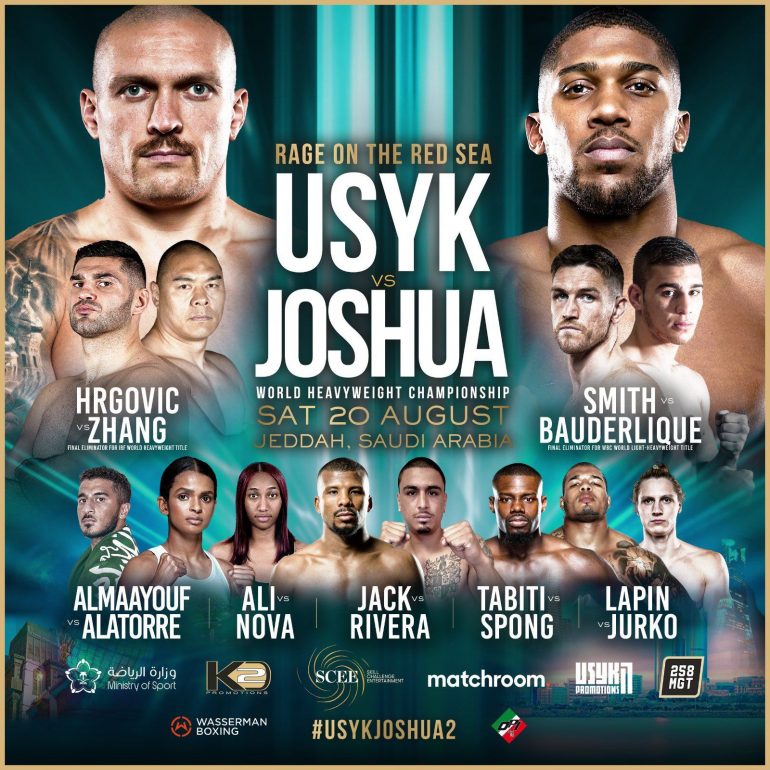 A solid undercard has been scheduled for the Ring heavyweight championship rematch between Oleksandr Usyk and Anthony Joshua at the King Abdullah Sports City Arena in the coastal city of Jeddah, Kingdom of Saudi Arabia on Saturday August 20.

Aside from the already announced Hrgovic-Zhang heavyweight clash, Liverpool’s Callum Smith (28-1, 20 KOs) returns to the scene of his finest moment where he stopped British rival George Groves in seven rounds in September 2018 to be crowned the WBA super middleweight titlist and winner of the World Boxing Super Series Muhammad Ali Trophy.

Now campaigning at light heavyweight, where he is ranked No. 4 by The Ring and as the No.1 contender with the WBC, ‘Mundo’ will face France’s reigning European champion and No.2 ranked WBC 175lbs contender Mathieu Bauderlique (21-1, 12 KOs) in an eliminator for the belt currently held by Artur Beterbiev.

Smith was last in action on the undercard of the first meeting between Usyk and Joshua at the home of Tottenham Hotspur in September, destroying Lenin Castillo with a brutal second round KO to return to winning ways after his points loss to Mexican superstar Canelo. Bauderlique last stepped through the ropes in September when he retired Igor Mikhalkin in seven rounds to land the vacant EBU crown.

“The last time I was in Jeddah I was crowned the best super middleweight in the world, so I have fond memories of the place,” said Smith. “The whole experience was great, and the fans really got behind me, so I’m really looking forward to returning next month. I won’t come away this time as a World Champion, but this is a tough fight on a great card and one which should set up a challenge at the number 1 in the Light-Heavyweight division.”