Born on this day: Ricardo Lopez 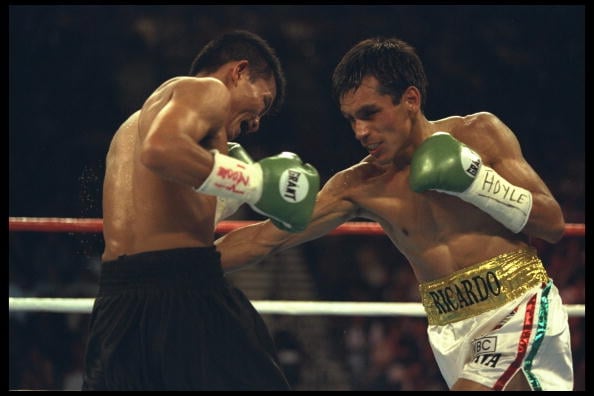 Ricardo Lopez attacks the body of Ala Villamor en route to an eighth-round KO, the first of four title defenses (all by stoppage and all in the U.S.) in 1996. Photo by Al Bello /Allsport
25
Jul
by Diego Morilla

In an era in which an undefeated record can result in a multi-million-dollar career, Ricardo Lopez should be the richest man alive.

It’s only too bad that the great Mexican flyweight lived in an era in which the lower weight classes were (as they are still very much today) greatly underappreciated and underpaid.

Ricardo Lopez Nava was born on July 25, 1966, in Cuernavaca, Mexico. He had his first amateur fight in the early ‘80s to kick off a run that still raises more than a few eyebrows today: according to lore (in lieu of proper records), “El Finito” (The Thin One) never lost a single fight as an amateur. And starting on 1985, he would never lose a professional fight either until his retirement in 2001.

During that stretch, he won numerous Golden Gloves tournaments in his native country, making his pro debut at the age of 18 and embarking on a 26-0 campaign before obtaining the first of his four belts in two divisions, becoming WBC strawweight titlist for eight years and a record-breaking 21 defenses while adding the WBA and WBO versions of the title in that process. He later added the IBF junior flyweight belt for the last stretch of his career.

He retired in 2001 without a single blemish in his record other than a cuts-induced technical draw against Nicaragua’s Rosendo Alvarez (avenged with a decision win eight months later, with Alvarez coming in at a higher weight but with Lopez taking the challenge nevertheless). His final record was 51 wins, with no losses and 1 draw, and 38 knockouts to his credit.

His greatest claim to fame, however, is his technical prowess and his impeccable boxing skills coupled with his killer instincts, a combination that places him, according to some observers, as one of the best Mexican fighters of all time.

Among the many great fighters he defeated during his illustrious career are Hideyuki Ohashi, Kyung-Yung Lee, Saman Sorjaturong, Ala Villamor, Alex Sanchez, Will Grigsby, Ratanapol Sor Vorapin, Zolani Petelo and many others. Although his era didn’t feature too many fighters remotely close to his skill level, he was still so much higher above his competitors that he has been named almost indisputably as the greatest strawweight fighter in the division’s short history.

Lopez was inducted into the International Boxing Hall of Fame in 2007.