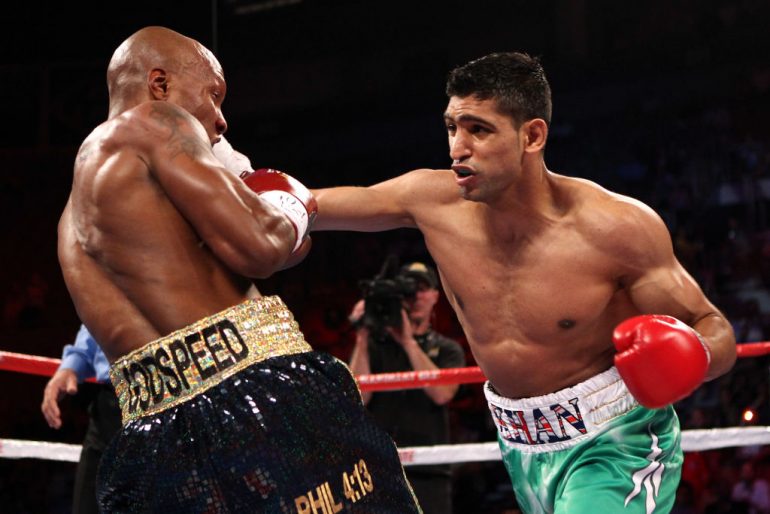 Photo by Scott Heavey/ Getty Images
23
Jul
by The Ring

“King Khan” in the form of his life.

On July 23, 2011, Britain’s Amir Khan dazzled in a fifth-round knockout over the always-dangerous Zab Judah at the Mandalay Bay Events Center in Las Vegas. The official time was 2:47.

Khan, the pre-fight favorite, was making his fifth defense of the WBA junior welterweight title that he’d wrenched from Andriy Kotelnik two years earlier. Brooklyn’s Judah was coming off a spectacular seventh-round stoppage of Kaizer Mabuza to claim the IBF crown.

Both men liked to be aggressive, but they were also vulnerable when tagged. Khan’s handspeed was his main asset, but his punching power was underrated and he had good variety. The 33-year-old Judah may have lost a touch of speed, but, as he’d proven against Mabuza, his hitting power could be fight ending. This was a matchup that all but guaranteed fireworks.

Instead, a crowd of over 7,200 fans were treated to a masterclass.

A razor-sharp Khan controlled every minute of the bout and banked all four completed rounds on all three official scorecards. A lightening quick jab kept the southpaw Judah honest, and every time the fiery New Yorker attempted to close the gap, Khan unloaded with a rapid-fire burst.

Judah had friend and mentor Pernell Whitaker in his corner, but he needed the multi-weight legend in the ring with him. Khan was too good and closed out with a right hand to the body that put his opponent down for the count. Judah filed a formal complaint with the Nevada State Athletic Commission claiming the punch was low. No action was taken,