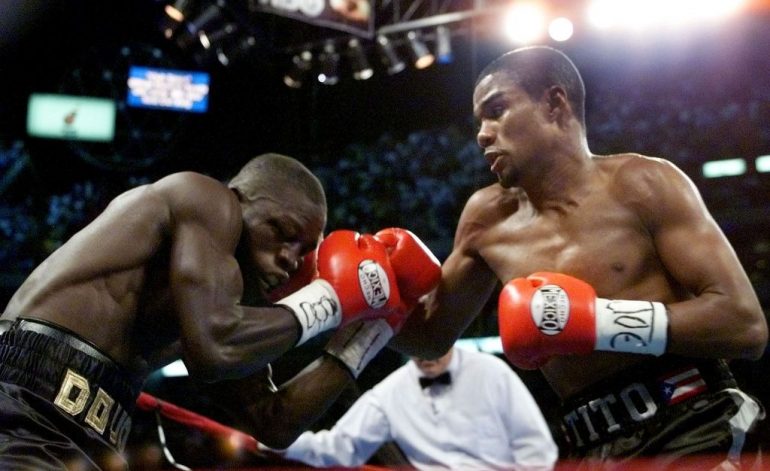 It’s just a shame that Tito’s stay at 154 pounds was so brief.

On July 22, 2000, Felix Trinidad scored a thumping third-round stoppage of mandatory challenger Mamadou Thiam to retain his WBA junior middleweight title at the American Airlines Arena in Miami, Florida. The official time was 2:48.

Trinidad, who made a record 15 defenses of the welterweight title, may have been at his very best at 154. On March 3, 2000, the Puerto Rican superstar got off the floor to deck WBA titleholder David Reid four times en route to a 12-round unanimous decision.

Thiam was the first defense and it was a massacre.

Just past the midway point of Round 1, the champ put full leverage on a left uppercut-left hook combination. Shocked by the power, Thiam covered up, but Trinidad broke through the guard by reversing the prior combo. This time the left hook caused severe damage to the challenger’s right eye and Tito’s follow up right lifted Thiam off the floor.

It was just a matter of time.

Trinidad blasted his man with every shot in the book and the swelling continued to worsen around the eye. Thiam battled back gamely, but he was overmatched and shipping tremendous punishment. Late in Round 3, another Trinidad left uppercut forced the Frenchman to turn his back and referee Jorge Alonso wisely stopped the fight.

Our Felix Trinidad Special Issue is available for purchase at The Ring Shop.