Born on this day: Gene Fullmer 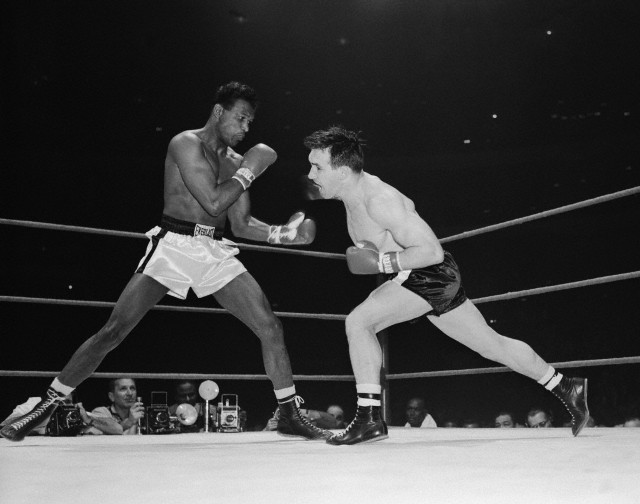 Not too many fighters can claim to have defeated the best fighter in the universe two times in four fights. And even fewer fighters in that impossible situation can claim to be more remembered for that sole loss than for their three victories.

Lawrence Gene Fullmer was born in West Jordan, Utah, on July 21, 1931. Born in a farm in which his father (a former boxer himself) had set up a ring in a barn, Fullmer didn’t have much choice but to join him and his own brothers in throwing punches for fitness and fun first and then for money.

Fullmer ditched his first name and began his professional career in 1951, and proceeded to win his first 29 fights, 19 of them by knockout. It took him only six years to achieve something that very few men of his time were able to accomplish: defeat the great Sugar Ray Robinson in a middleweight title fight. Fullmer won a unanimous 15-round decision against Robinson on January 2, 1957, but his reign would be short lived.

In their rematch four months later on May 1, 1957, however, Robinson managed to correct the mistakes he had made in the grueling, 15-round bout in which he lost the title, and was outboxing Fullmer when he threw what has been called a “perfect punch (that) never has been so well-delivered with so much at stake” by Sports Illustrated writer Martin Kane.

It was a perfect left hook that landed flush on Fullmer’s chin and immediately dropped him to the canvas for the full count. It instantly became one of Robinson’s greatest highlights.

In 1959, the National Boxing Association  withdrew its recognition of Robinson as middleweight champion. Fullmer and fellow former middleweight champion Carmen Basilio (who had participated in the previous four Fights of the Year according to The Ring) faced off for the vacant belt, with Fullmer lifting the crown after stopping the tough-as-nails Basilio in the 14th round of a war that was later honored as the Fight of the Year. Fullmer also held the Ring middleweight belt during his short reign in 1957.

Fullmer would defend that portion of the title against such contenders as Basilio, Ellsworth Webb, Florentino Fernandez, Benny Paret, and others. He held future champion Joey Giardello to a draw and also drew against Robinson in their third meeting, a result that was widely criticized as a robbery, with some observers giving as many as much as five rounds of advantage to Robinson. In their final clash in 1961, Fullmer beat Robinson by unanimous decision.

After finally losing his title to Nigeria’s Dick Tiger in 1962 and losing a rematch the following year (with another fight in between those two ending in a draw), Fullmer finally retired with a record of 55 wins, 6 losses, and 3 draws, with 24 stoppage wins.

Throughout those years and all those fights, his stoppage loss to Robinson remained the only knockout loss in his career (without counting his final bout against Tiger in Nigeria, where Fullmer retired on his stool in the seventh round).

Fullmer was inducted into the International Boxing Hall of Fame in 1991.

That’s what it took to take the “Cyclone” down, against the greatest of all time – and only once in 64 fights.