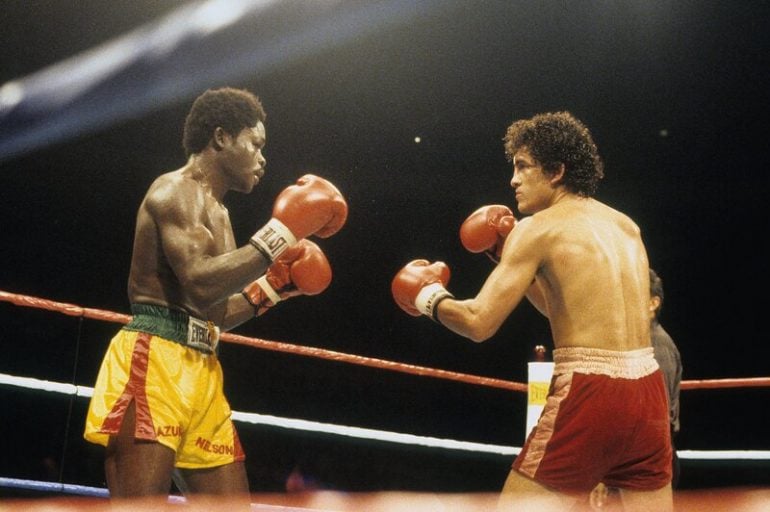 It will forever be a bitter-sweet fight.

On July 21, 1982, Salvador Sanchez scored a 15th-round stoppage over the gallant Azumah Nelson to retain Ring and WBC featherweight titles at Madison Square Garden in New York. The official time was 1:49.

Nelson, just 13-0 at the time, was drafted in as a late-substitute for the world-rated Mario Miranda. Completely unknown outside his native Ghana, this unlikely challenger was viewed largely as cannon-fodder for Sanchez, who was making his ninth title defense.

The boxing world was in for a shock.

From the opening bell, both men threw down in a hotly contested battle. Sanchez, as always, boxed brilliantly, but Nelson hadn’t ventured to the U.S. to make up the numbers. His fighting spirit was incredible and no one was more surprised than the great Sanchez.

However, early in the seventh, Nelson caught a terrific left hook to the jaw that caused him to stumble back into a neutral corner. Sanchez pursued quickly and a follow-up combination, punctuated by another short left, put his man down. Following a standing-eight count, Nelson went back to work.

And the second half of the fight was every bit as entertaining as the first.

Sanchez displayed the superior craft, but Nelson stayed in hot pursuit and never stopped letting his hands go. There were some hellacious exchanges down the stretch, but the challenger, who had never been beyond 10 rounds in his career, was now fighting fatigue as well as his opponent.

In the 15th and final round, Nelson, sensing he was behind on the cards (he was up on one and down on two), went for broke. He swung his heaviest shots with abandon, which only served to open him up for the champ’s deadly counter punching. Dazed and tired, a brutal sequence of hooks floored the exhausted Ghanian heavily. Time was running out. After taking his second standing count of the night, Nelson was nailed by another combination before referee Tony Perez came to his rescue.

Nelson would bounce back to compile a Hall of Fame resume, winning three world titles across two weight divisions. He defeated some of the best fighters on the planet, but “The Professor” first showcased his greatness in defeat to the legendary “Chava.”

Just 22 days after this bout, Sanchez (44-1-1, 32 KOs) was tragically killed in an automobile accident in Mexico. He was posthumously inducted into the Hall of Fame in 1991.