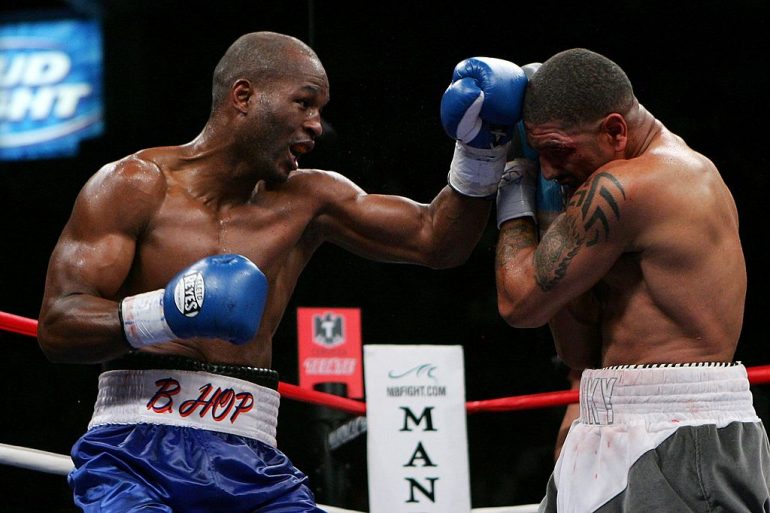 Photo by Ethan Miller/ Getty Images
21
Jul
by The Ring

Definitive proof that a matchup between great fighters doesn’t necessarily make for a great fight.

On July 21, 2007, Bernard Hopkins scored a 12-round unanimous decision over Winky Wright to retain his Ring light heavyweight championship at the Mandalay Bay Events Center in Las Vegas. The official scores were 117-111, 117-111 and 116-112.

Hopkins, a legendary long-reigning middleweight champion, had moved up two weights to dethrone light heavyweight king Antonio Tarver in June 2006. The old school Philly general had pondered retirement, but a 170-pound catchweight contest against the highly respected Wright was enough to peak his interest.

Like Hopkins, former undisputed junior middleweight champion Wright was one of the best pound-for-pound fighters in the world. The Florida-based southpaw had scored two impressive wins over Sugar Shane Mosley (UD 12, MD 12) and was punch perfect in his 160-pound debut against Felix Trinidad (UD 12). Then-middleweight champ Jermain Taylor held Wright to a draw a year earlier, but many felt the title should have changed hands.

Hopkins was a different task altogether.

While the catchweight pulled Hopkins down five pounds from light heavyweight, the 170-pound limit was more or less perfect for him. Wright, on the other hand, was a lot more fleshy than he was at 160 and his opponent held all the physical advantages.

And that was before a punch was thrown.

Wright’s hand speed and combinations did pay dividends early, but he could not sustain the attack. Hopkins, a master of strategy, discovered that there was little point in throwing shots into Wright’s near-impenetrable guard. Mosley, Trinidad, Taylor – and scores of others – had tried that and had very little success. Instead Hopkins looked to get in close and punch around the guard and behind the elbows. Naturally stronger, Hopkins would rule the roost on the inside and make it a very difficult evening for Winky Wright.

He succeeded in doing just that.

The fight was messy, dirty and lacked any serious drama, but there was only one winner after 12 rounds.