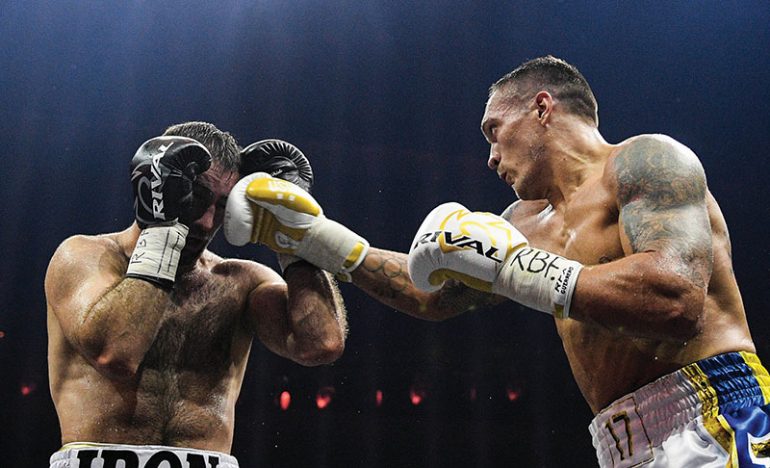 Usyk (right) established himself as the finest cruiserweight in the world by defeating Murat Gassiev. Photo by Vladimir Astapkovich / Sputnik via AP
21
Jul
by The Ring

And he was only getting started.

On July 21, 2018, Oleksandr Usyk scored a wide 12-round unanimous decision over the previously unbeaten Murat Gassiev to claim the undisputed cruiserweight championship at the Olympic Stadium in Moscow. The official scores were 120-108, 119-109 and 119-109.

Usyk, who entered as the WBC and WBO 200-pound titleholder, took on IBF and WBA counterpart Gassiev in the final of the inaugural World Boxing Super Series tournament and picked up the Ali trophy. The quick-hitting Ukrainian lefty also annexed The Ring championship with this victory.

Former Olympic champ Usyk was a fleet-footed boxer-mover with a dazzling skillset. On the road to the WBSS final, he’d halted Marco Huck (TKO 10) and edged Mairis Briedis (MD 12). By contrast, the powerfully built Gassiev was a come-forward destroyer, who had knocked out 19 of 26 opponents. In his half of the draw, the Russian star had cleaned out Krzystof Wlodarczy (TKO 3) and Yuniel Dorticos (TKO 12).

The final was no contest.

Usyk boxed brilliantly throughout; an educated southpaw jab set up whipping combinations to head and body. By the time Gassiev thought about responding, Usyk had located an escape route and set himself to launch another flurry.

“My team made me look like I looked in the ring,” Usyk said through an interpreter. “This is our victory.”

Favored by many to consolidate the cruiserweight championship before the tournament began, Usyk saved his best performance for last. He was dazzling. There would be only one defense – an eighth-round stoppage of Britain’s Tony Bellew – before Usyk turned his attention to heavyweight.

The glamor division’s reigning unified champ is doing okay there, too.