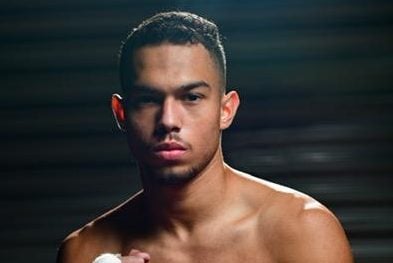 He’s been dead for some time now. That’s the way Ernesto Mercado Sr. views it. He should know. He’s the one who buried “Neto Mercado.” Neto, you see, was someone different, someone who was in jeopardy of losing his family, the guy who did drugs, the guy who was shot at, hurt his family, had no self-control and who had probably died from an overdose.

In most cases in life, it’s the father rescuing the son. Though in the case of Ernesto “Tito” Mercado, a budding 20-year-old lightweight star from Pomona, California, he saved his dad.

Mercado (6-0, 6 knockouts) will be headlining an August 25 show at The Hangar at the OC Fair and Events Center in Costa Mesa, California, in his first eight-rounder, which will be fought at 138 pounds against an opponent to be determined on a card promoted by Roy Englebrecht Promotions.

In Tito’s corner will be his father, Ernesto Sr., a man who’s made a complete turnaround in his life and has been clean for years.

“That man, the man who put his family through hell, that man is dead, I buried him, he’s long gone,” Ernesto Sr. said. “I was probably dead about five or six times. I lost years of my life doing drugs and running the streets. I ran around with a barrel at my head, and I was fortunate that no one ever pulled the trigger. I’ve been shot at three or four times, though I have never been shot. What I went through was real. It wasn’t movie s—t.

“The only one who can cure anyone is yourself. I had to do come to the point where I had to do therapy on myself. It’s why I say ‘Neto’ is dead. I don’t want to be Neto anymore. He was someone who did violence and did drugs. I buried that guy. What keeps me grounded is being ‘Ernesto Mercado.’ I can help other kids because I lived that life. I don’t wake up angry over what I missed. I can’t. God has given me a second, third, fourth, fifth, sixth chance. Everything I put my parents through the exact opposite happened with me and my son.

“I don’t deserve my son. If Tito was not in my life, I would not be here. I can honestly say that my son saved my life.”

Tito’s mother played a major role in keeping her children on the straight path. Many times, she had to do it alone.

Tito always had an idea of his father’s demons. He would be gone for periods of time and his mother would keep her head down and stay on her grind.

“There were times when my dad would come home looking like a street person from the streets of Pomona living in my house,” Tito said. “I knew that if I kept boxing and I kept winning, that would pull my father away from taking those trips his home boys doing drugs. I felt I had the responsibility with carrying my family on my back at a young age. My dad started me boxing when I was four in the garage, working with my uncle (Israel Mercado, a 9-1 lightweight). I was the pest that they had to kick out (laughs).

“But I knew that if I kept winning would help my dad.

“I don’t see myself as a life safer, just a son who loves his father. It’s also motivating. I know if I stay on my game, my dad is going to stay right there with me on his game. I know if I do well, he’s going to do well. And, in a way, we saved each other’s lives. My dad doesn’t really understand how he saved my life. There are a lot of temptations out there that people try to drag me into. After seeing my dad out there, doing drugs, with his home boys, I can’t see myself doing that. I have an example right under my roof what drugs also did to my family. I always walk around with a chip on my shoulder with all these guys who tried to get around me doing cocaine and wanting me to smoke weed.

“My dad wants to protect me and who knows what that could have led to. We talk about positive things. And every now and then, he’ll come by and ask me personal advice for him.”

Right now, Mercado Jr. is a promotional free agent. But all the prime promotional outlets have shown interest like Golden Boy, Top Rank, Matchroom Boxing, because they realize the talent Tito exhibited as an amateur, when he beat Malik Warren, Haven Brady and Aaron Aponte. He was supposed to fight budding pro Keyshawn Davis, but Davis wanted no part of him.

“We spoke to pretty much everyone and I want the leverage of who want to go with,” said Tito, a Pomona High School graduate who was taking college courses before the pandemic hit. “I stopped my last opponent in the same number of rounds as Keyshawn Davis did, but mine was more impressive, now I am going to continue being the most feared lightweight when I fight on August 25th. I am tired of all these entitled fighters, people who don’t want to fight, just talk. I am here to force these guys into these fights, and to bring the pride back into boxing. I am here to expose all of them.

“I want all the big fighters, Keyshawn Davis and especially Shakur Stevenson, I see flaws in all of them.”