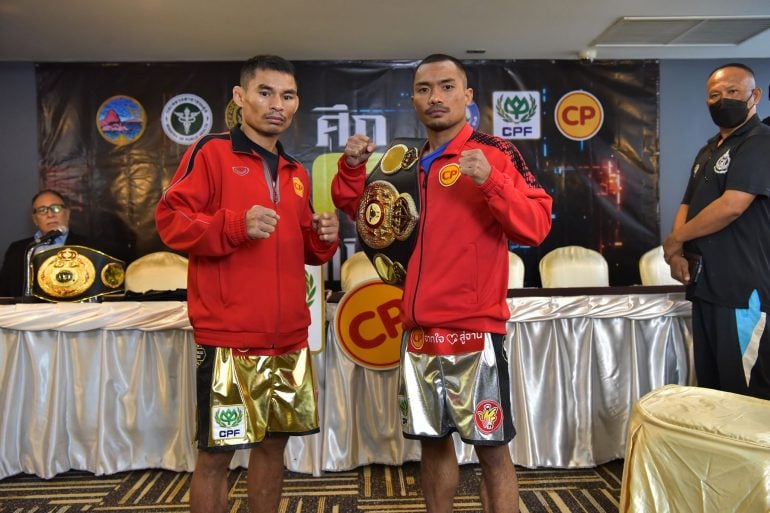 Knockout CP Freshmart and Wanheng Menayothin made the 105-pound limit on Tuesday, paving the way for their long overdue championship showdown.

Freshmart (23-0, 9 knockouts) weighed in at the limit for his WBA strawweight title defense, while Menayothin (55-2, 19 KOs) came in just under at 104.8 pounds for their 12-round bout on Wednesday in Chonburi, Thailand.

The fight will be a meeting of Thailand’s two biggest names at 105 pounds of this generation. The two had circled each other in recent years, though a unification bout between the two never occurred in their primes.

Menayothin, 36, won the WBC title in 2014 and made twelve defenses of his belt before finally losing to Petchmanee CP Freshmart in November of 2020 by a close unanimous decision. At the time of the defeat, Menayothin had run his record to an impressive 54-0.

Petchmanee repeated in their rematch earlier this year to retain the title. Menayothin’s last fight against Jinnawat Rienpit in May was declared a no contest because Rienpit had not been cleared to fight.

The 31-year-old Knockout CP Freshmart, whose real name is Thammanoon Niyomtrong, has been champion since 2016, and is coming off a thrilling fifth round stoppage win over Robert Paradero in December.

Knockout CP Freshmart is the no. 1 rated fighter by The Ring at 105 pounds, while Menayothin, whose real name is Chayaphon Moonsri, is rated no. 3.