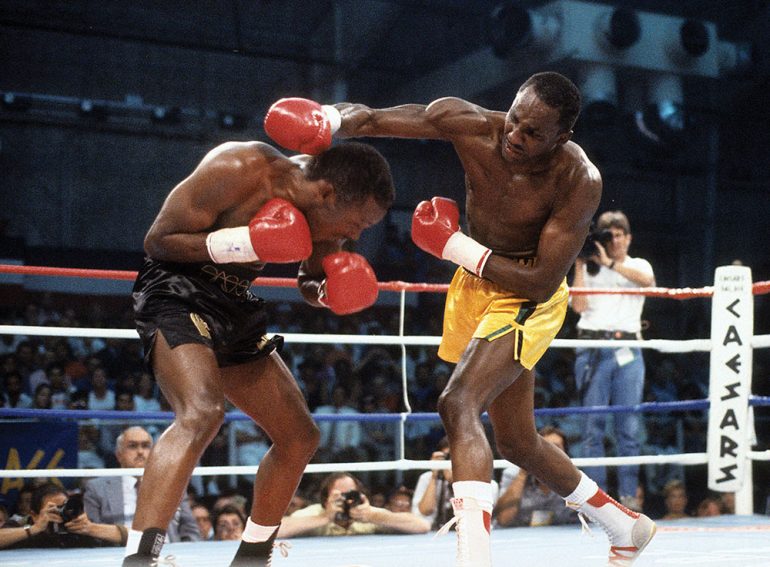 McCallum (right) against Curry. Photo by Getty Images.
18
Jul
by The Ring

When “The Body Snatcher” defanged “The Lone Star Cobra.”

On July 18, 1987, Mike McCallum scored a devastating fifth-round knockout of Donald Curry to retain his WBA junior middleweight title at the Caesars Palace Sports Pavilion in Las Vegas. The official time was 1:14.

McCallum, who became Jamaica’s first ever world champion when he outpointed Sean Mannion (UD 15) for the vacant title in October 1984, was unbeaten in 31 fights with 28 knockouts. A terrific boxer-puncher, the 31-year-old McCallum had already defeated Luigi Minchillo (TKO 13), David Braxton (TKO 8) and Julian Jackson (TKO 2) in title defenses.

Since losing the undisputed welterweight championship, via stunning upset to Lloyd Honeyghan (TKO 6), Curry had won two fights at 154 pounds. Strangely enough, both wins had come by way of disqualification, but the 25-year-old Texan was still considered among the finest pound for pound fighters in the world and he was installed as pre-fight favorite.

All was going to plan for Curry on fight night. He buckled McCallum’s legs with a devastating right near the end of Round 2 and boxed brilliantly over the first four. Despite sustaining some heavy swelling around the left eye, the challenger was ahead on points and looking comfortable.

After releasing a jab-left hook combination at center ring, Curry moved back in a straight line with his right hand down. McCallum, who had held his feet and moved his head, seized the moment and followed a throwaway right uppercut with a perfect left hook that struck the challenger flush on the jaw.

“That was one of the best knockouts I ever had – it was a great knockout, a great fighter and a great fight,” McCallum told The Ring years later. “I went over it one or two times, same combination. I countered with a right uppercut and hook. That’s all it takes. That’s all I needed. I felt it in my hand.”