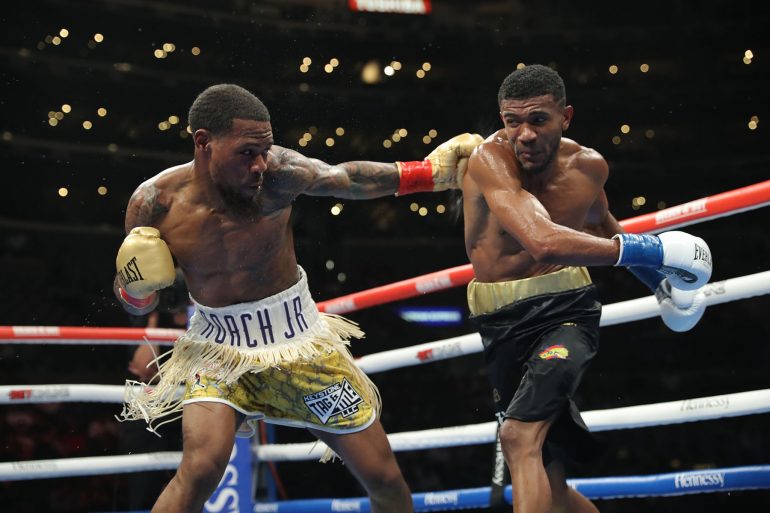 Roach stayed on top of Rodriguez (20-2, 10 KOs) from the opening bell, stalking the rangy Colombia-based Venezuelan behind a crisp jab and high guard. Whenever he was in range, he fired an arrow-straight right hand or compact body shots.

Rodriguez tried to retaliate to the body but his shots strayed low in Round 4, which saw Roach taking a delayed knee after right to the protective cup. Roach recovered and finished the round strong. The 26-year-old Washington DC native kept the heat going in Round 5 when he landed a leg-buckling short right to the jaw of his 34-year-old opponent.

Roach’s technical pressure put Rodriguez in a defensive shell over the second half of the bout.

Sandoval was expected to do to Jimenez what Roach did to Rodriguez, only with a little more violence as the 23-year-old Californian is known for engaging in slugfests. 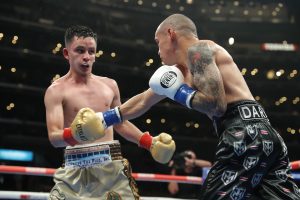 David Jimenez was often on the move against Ricardo Sandoval but he landed his share of punches. Photo by Tom Hogan / Golden Boy Promotions

However, Jimenez brought a herky jerky hands-down style and a little more attitude than Rodriguez had to offer. The unbeaten but unheralded 30-year-old from Costa Rica didn’t just frustrate Sandoval with this hit-hold-and-run tactics, he scored an 11th-round knockdown to clinch the decision from his younger, more aggressive opponent.

“We executed our game plan perfectly,” said Jimenez. “In the first six rounds it was a lot of movement and aiming. After the sixth round I started to take advantage. My rival was very tough and stubborn. He has a lot ahead of him.”

Most ringside observers thought Sandoval (21-1, 15 KOs) outworked Jimenez – as much as +900 according to some odds makers – and deserved the nod, but they also admit that the unorthodox underdog was in the fight from start to finish. Not too shabby considering Jimenez’s upset victory came against The Ring’s No. 5-rated flyweight.

Sandoval, a free-swinging boxer from Rialto, California, climbed the rankings with back-to-back stoppage victories over British fringe contender Jay Harris and four-time world title challenger Carlos Buitrago. However, Jimenez did not provide as much of a target to Sandoval as those two fighters.

Sandoval remained the aggressor throughout the brisk 12-round bout, but Jimenez’s lateral moving, switch-hitting pot-shot-on-the-fly style limited the exchanges. When in close, the Costa Rican would tie up Sandoval and engage in roughhouse tactics, such as holding and hitting, an infraction that cost him a point from referee Thomas Taylor in Round 7.

Sandoval had success with a concentrated body attack during the late rounds, when it seemed his pressure and high punch output had put Jimenez in survival mode, but he was dropped by a short right cross in Round 11, which energized the crafty Central American. The two flyweights let it all hang out in an entertaining final round.

“I felt like I was boxing him correctly so I feel very good,” said Sandoval. “I was also countering him downstairs and upstairs. But you know these things happen. I felt like I won the fight. The people won tonight and got one hell of a fight.”