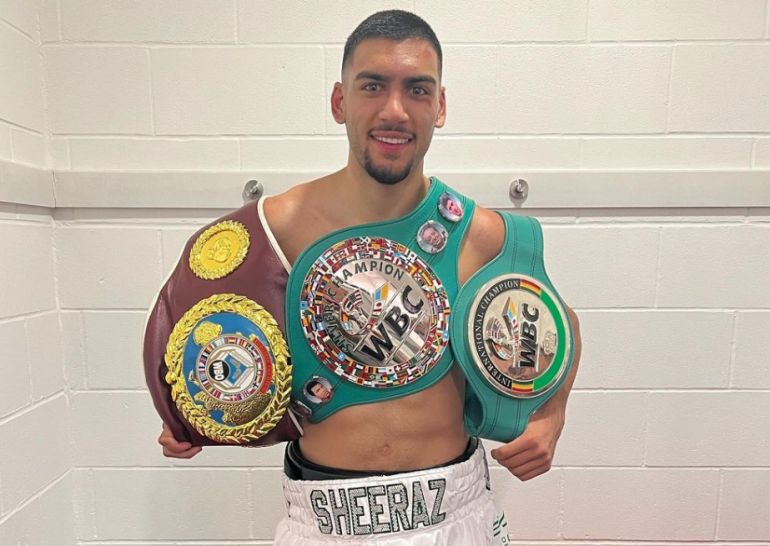 Hamzah Sheeraz got off the canvas to stop Francisco Emanuel Torres in round five of a 12-round middleweight bout on Saturday at the Copper Box Arena in London.

It was the 10th straight stoppage win for the 23-year-old Sheeraz (16-0, 12 knockouts), a London based middleweight who is signed with Frank Warren’s Queensberry Promotions, while the loss is the first for the Argentinian Torres in ten fights.

Things livened up in a wild third round when Sheeraz put Torres down with a well-placed jab. Sheeraz looked to close the show but was caught by a left hand and also went down. After regaining his footing, Sheeraz again put Torres down.

Sheeraz continued to pressed the action in the fourth before landing a terrific right hand that put Torres (17-4-1, 5 KOs) down heavily for the third time in the contest. To his credit Torres made it to his feet but referee Mark Lyson wisely intervened at 1:56 of the fifth round.

Well-regarded Dennis McCann scored a career best win, stopping James Beech Jr. in the eighth round of their featherweight contest.

McCann, 21, dominated the action, dropping Beech in the opening round, hurting his opponent with and uppercut before dropping him with a follow up combination. The youngster looked to secure the early finish but was unable to get it.

Although McCann enjoyed a good second and third rounds, Beech started to have more success in the middle rounds. McCann, who was cut in the sixth round, stepped on the gas and his superior quality told picking apart the former British title challenger in the seventh before the southpaw dropped Beech in the eighth with a right hand.

Beech was determined and got to his feet and continued. It proved no more than a stay of execution when McCann tore into his opponent, prompting Beech’s corner to throw the towel in. Referee Victor Loughlin then ended the fight at 1:34 of the eighth.

Heffron threatened to get the stoppage in the first round but Clarke was just about able to weather the storm and came back into the fight in the second round before Heffron regained the momentum in the third round.

Heffron, who had lost British title attempts down at middleweight to Liam Williams (TKO 10), Denzel Bentley (RTD 4), landed a big right hand that shook the defending champion. Heffron seized the initiative and followed up with a few well-placed  bodyshots, a big left hand wobbled Clarke and sent him stumbling backwards.

The Manchester fighter smelled blood and threw a handful of shots that had Clarke covering up until referee Bob Williams waved the fight over at 2:28. Clarke and his team were bitterly disappointed by what they felt was a quick stoppage.

Clarke (20-2-1, 8 KOs) was fighting for the first time in 16-months when he stopped heavily touted Willy Hutchinson (TKO 5). However, since then, his career has been beset by injuries and the ring-rust showed but that would take away from Heffron (28-2-1, 22 KOs) who had the bite between his teeth.

Up-and-coming featherweight Nick Ball overcame a slow start to stop Nathanael Kakololo in the 12th round.

The 25-year-old Liverpudlian was always in control but it took until the final round for him to be able to finally break the game Kakololo’s will. Ball landed a solid right hand that took the Namibian imports heart, as he turned away Ball jumped on him and landed a pair of left hooks had referee John Latham jump in and call a halt at 1:27 of the final round.