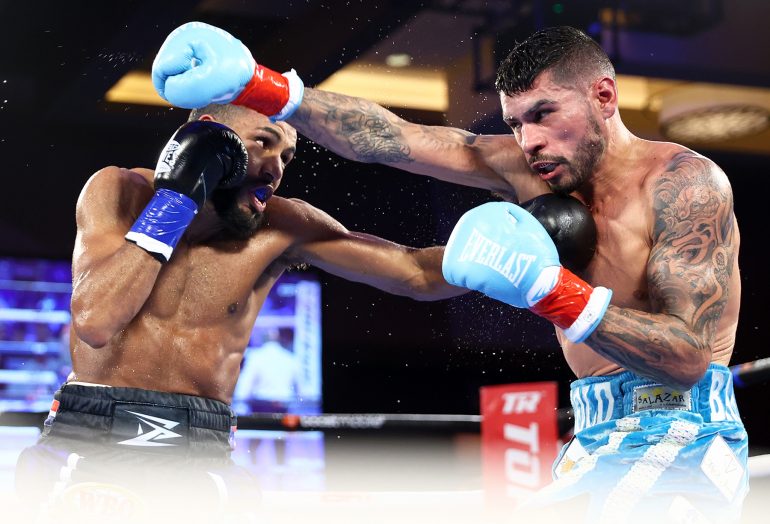 TEMECULA, Calif. – Arnold Barboza outboxed Danielito Zorrilla Friday night, winning by unanimous decision before a partisan and sold-out crowd of 2,836 at the Pechanga Resort Casino. Barboza-Zorilla was the main event of a Top Rank card broadcast on ESPN/ESPN+.

Friday was marketed as a showdown between two aggressive boxer-punchers, but it was Barboza who showed his pedigree between the two fighters.

Early on in the fight, Barboza walked Zorrilla down, initiating exchanges and connecting with the more-effective punches. With about a minute left in the second round, Barboza landed a series of combinations that Zorrilla took well. Not to be outdone, Zorrilla landed a series of right hands to the head of Barboza as the round concluded.

Zorrilla continued to land to the head of Barboza, whether it was a lead or counter right hand, but as the bout progressed, he would almost always throw one punch at a time. When he would throw a punch, it was often off-balanced, leaving himself exposed to getting countered by Barboza.

From the fourth round on, Barboza was the more-effective fighter, outboxing Zorrilla from distance. Continuing to take initiative, Barboza was able to throw and land two and three-punch combinations to the head, then was able to move out of Zorrilla’s range.

With most of the partisan crowd chanting, “Let’s go, Arnold!”, Barboza attempted to maintain his game-plan of outboxing Zorrilla.

“I was a little rusty,” said Barboza after the fight. “It was hard with the crowd. I was trying to relax. We will go back to the gym in about a week and come back better.”

Sensing he was down on the scorecards, Zorrilla went for broke during the final round. He was able to connect flush with right crosses to the head that Barboza took well. Both had their moments during the final minute of the 10th round, standing in the pocket and throwing and landing hooks and crosses until the final bell sounded.

Barboza did admit that his hand was hurting during the fight, but it was from the number of punches he landed.

“My hand was a little swollen,” said Barboza.

Afterwards, Barboza did admit he is still hopeful a fight can take place between him and Teofimo Lopez, who is now campaigning at 140 pounds.

“My main goal is a (world) title shot. My manager knows that. We do want Teofimo next.”