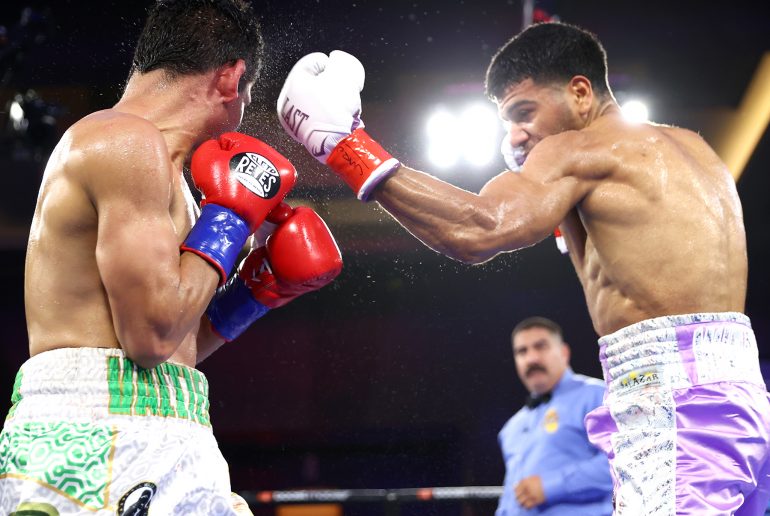 TEMECULA, Calif. – Lightweight prospect Raymond Muratalla made the most of the opportunity that was presented to him.

Muratalla dropped Jair Valtierra once en route to a dominant one-sided decision win Friday night at the Pechanga Resort Casino. All three judges scored the bout 80-71 for Muratalla, who improved to 15-0, 12 knockouts.

From the opening bell, Muratalla, who is trained by Robert Garcia, was the more effective fighter, walking Valtierra down and landing combinations to the head. Valtierra was content with backing up against the ropes, looking to counter Muratalla as he was coming in.

Muratalla scored a knockdown of Valtierra, dropping him to the canvas with about a minute left in the fourth round. Muratalla landed a counter left hook to the temple that staggered Valtierra and dropped him face-first to the canvas. To his credit, Valtierra beat the count and bravely fought back.

Valtierra began letting his hands go during the fifth round, but he would get countered as he left himself exposed to hooks and crosses by Muratalla.

Despite being outgunned, Valtierra continued to give a commendable account of himself, standing in the pocket and willing to receive a punch or two in exchange for him landing a hook or counter to Muratalla. Valtierra was able to connect more, but was outboxed by Muratalla during the last two rounds.

“I did okay,” said Muratalla after the fight. “I thought I was sloppy at times. He has a strong head, but my timing keeps getting better and better.” 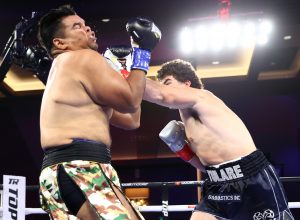 While Friday marked a giant step forward for Muratalla, who is promoted by Top Rank and will likely receive more opportunities on ESPN platforms, Muratalla wants to continue improving.

“I just want to stay active and keep getting better,” said Muratalla. “(Friday night) was an opportunity I couldn’t pass up.”

Valtierra was originally scheduled to face prospect and 2020 Olympic silver medalist Keyshawn Davis, but Davis withdrew from the fight last week due to a non-COVID issue. Muratalla was scheduled to fight in preliminary action on the undercard of the Top Rank bill and was glad to take the fight when it was presented to him.

In the opening bout of the Top Rank on ESPN telecast, heavyweight Richard Torrez, Jr. of Tulare, California stopped Roberto Zavala, Jr. in the first round.

Torrez was the quicker or more-effective fighter from the opening bell. A barrage of punches backed Zavala up against the ropes. After Torres landed a combination to the head, referee Eddie Hernandez immediately stopped the fight at 58 seconds, prompting a cascade of boos from the crowd. Zavala protested the stoppage, claiming to not be hurt.

The 23-year-old Zavala won a silver medal at the 2020 Olympic Games in Tokyo, Japan.

– Unbeaten heavyweight Stephen Shaw dropped Bernardo Marquez (14-5-1, 10 KOs) of Imperial Valley, California three times en route to a first round knockout victory. Shaw was dominant from the opening bell, hammering Marquez with hooks and crosses to the head. Shaw, who is co-promoted by Top Rank and Lou DiBella and resides in Saint Louis, Missouri, improves to 17-0, 13 KOs.

– Junior featherweight prospect Floyd Diaz dropped Pedro Salome (3-1-1, 1 KO) of Anaheim, California once en route to a knockout win at 1:17 of the third round. Diaz, who is managed by James Prince, followed up the knockdown by hurting Salome with a combination to the head, prompting referee Daniel Sandoval to stop the fight at 1:17.

– Featherweight Austin Brooks of San Diego defeated Victor Saravia (1-3, 1 KO) of Los Angeles by unanimous decision. All three judges scored the bout 40-36 in favor of Brooks, who improves to 7-0, 2 KOs.