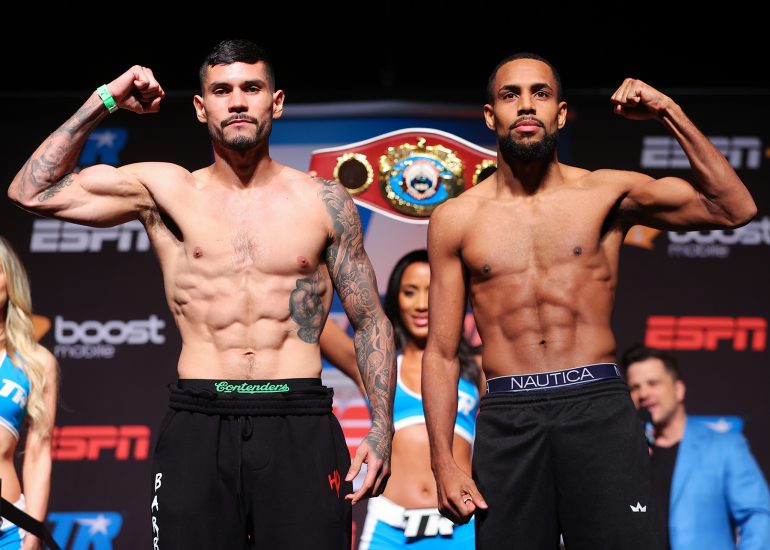 Both Arnold Barboza, who is ranked No. 6 by The Ring, and Danielito Zorrilla made weight for their 10-round clash at the Pechanga Resort Casino in Temecula, California. At Thursday’s weigh-in, Barboza and Zorrilla both weighed in at 139.6 pounds.

Barboza (26-0, 10 knockouts), who resides in nearby Los Angeles, is the prohibitive favorite having faced the better opposition of the two, defeating once-beaten and fringe contenders. In his last bout on August 14, Barboza defeated Antonio Moran by unanimous decision. The win over Moran came almost 10 months after Barboza overcame a knockdown to defeat Alex Saucedo by unanimous decision.

Both Barboza and Zorrilla are aggressive boxer-punchers who should have no problem finding each other in the center of the ring.

In the co-feature, lightweight Raymond Muratalla (14-0, 12 KOs) of nearby Fontana will square off against Jair Valtierra in an eight-round junior welterweight bout.

Muratalla, who weighed in at 136 pounds, replaced top prospect Keyshawn Davis after Davis withdrew from the fight due to a non-COVID issue. Muratalla last fought on April 30, knocking out Jeremy Hill in the third round.

Valtierra (16-1, 8 KOs), who resides in Leon, Mexico, followed up a knockout loss on August 20 to defeat Javier Jose Clavero by unanimous decision three months later. He weighed in at 137 pounds.

In the opening bout of the ESPN telecast, heavyweight Richard Torrez (1-0, 1 KO) of Tulare, California, a 2020 Olympic silver medalist, will face Roberto Zavala, Jr. (2-1, 2 KOs) of Del Rio, Texas in a four-round bout.

Both Muratalla and Torrez are trained by Robert Garcia.