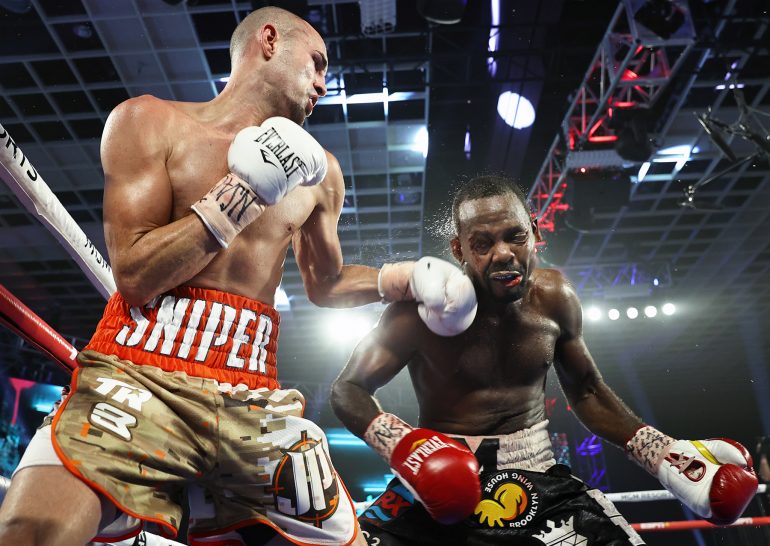 In the 10-round heavyweight co-feature, the fighting pride of Toledo, Ohio, undefeated puncher Jared “The Real Big Baby” Anderson, returns to action against veteran Miljan Rovcanin.

Promoted by Top Rank, in association with DiBella Entertainment, Pedraza-Commey and Anderson-Rovcanin will be broadcast live on ESPN, ESPN Deportes and ESPN+ at 10:30 p.m. ET/7:30 p.m. PT.

Tickets starting at $49 are on sale now at www.hardrockcasinotulsa.com.

“The junior welterweight division is talent-rich, and the winner of Pedraza-Commey is in line for a massive fight,” said Top Rank chairman Bob Arum. “We are thrilled to see Jared Anderson back in action. He is the world’s best young heavyweight, and fans will have another opportunity to see a future superstar.”

Pedraza (29-4, 14 KOs), from Cidra, Puerto Rico, is a two-weight world champion who has fought many of this generation’s top fighters since capturing the IBF junior lightweight crown in June 2015. He moved up to the junior welterweight ranks in 2019, rebounding from a loss to Jose Zepeda to author victories over Mikkel LesPierre, 2008 U.S. Olympian Javier Molina, and the previously unbeaten Julian Rodriguez. Pedraza’s momentum was halted in March when he dropped a tightly contested decision to former unified world champion Jose Ramirez.

Pedraza said, “August 27 will definitely be a high-stakes battle between two world-class fighters. We are both coming to get back on the winning path. That’s the perfect recipe for a great fight. I know that a convincing victory against an opponent of Commey’s caliber will put me back in contention to capture that coveted world title opportunity. Despite what happened in my last fight, I still have my sights set on being crowned world champion at 140 pounds. I’m still chasing my goal of becoming a three-division world champion.”

Commey (30-4, 27 KOs), one of Ghana’s most accomplished fighters, captured the IBF lightweight world title in February 2019 with a second-round stoppage over Isa Chaniev. Since losing his title to Teofimo Lopez that December, Commey knocked out Jackson Marinez in six rounds and lost a decision to pound-for-pound legend Vasiliy “Loma” Lomachenko. After 34 fights campaigning as a lightweight, Commey now moves up to 140 pounds in hopes of winning a second world title.

“I am grateful to DiBella Entertainment and Top Rank to be fighting on ESPN as I begin my quest to become a two-weight world champion,” Commey said. “Pedraza is a gentleman and a great champion, and I will have to be at my best to earn the victory.”

Anderson said, “I am 100 percent healthy and more than ready to get back in the ring. I’m creating a legacy for my last name and growing as a fighter with every fight. Tune in on August 27 because ‘The Real Big Baby’ is back!”

The undercard — streaming exclusively on ESPN+ — is scheduled to include the return of heavyweight puncher Efe Ajagba (15-1, 12 KOs) in an eight-rounder against Hungary’s Jozsef Darmos (14-4-3, 10 KOs). Ajagba, a 2016 Nigerian Olympian, has not fought since last October’s defeat to Cuban star Frank Sanchez on the Tyson Fury-Deontay Wilder III undercard. Injuries delayed Ajagba’s return, and he’s looking to reclaim his status as one of the division’s rising talents.

In other undercard action:

Tokyo 2020 U.S. Olympian Tiger Johnson (4-0, 3 KOs), from Cleveland, Ohio, steps up in class against Harry Gigliotti (8-3, 3 KOs) in a six-round junior welterweight scrap. Johnson, at 23 years old, is one of the sport’s brightest young talents. He fought at Hard Rock Hotel & Casino Tulsa in January and shut out the previously undefeated Xavier Madrid.

Tulsa native Trey Lippe Morrison (18-1, 17 KOs), who lost his undefeated record in his last bout, is scheduled to return in an eight-round heavyweight fight.

Frevian Gonzalez (5-1, 1 KO), who trains with Pedraza, will see action in a six-round lightweight bout against Gerardo Esquivel (3-2-1, 1 KO).