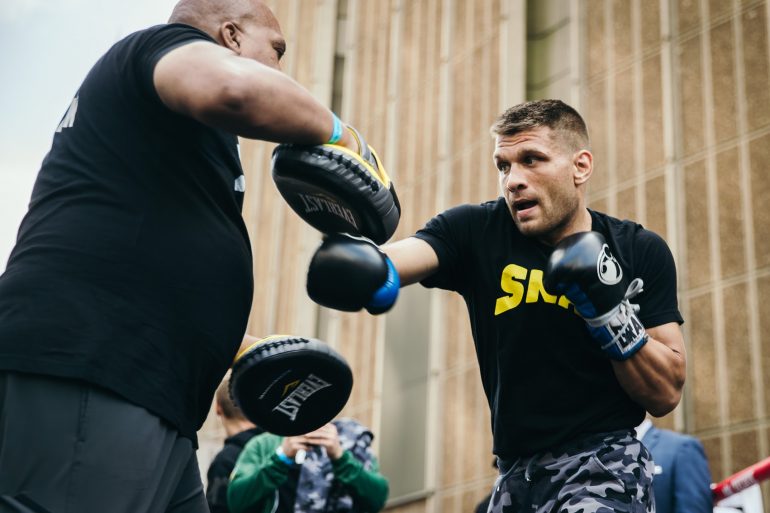 Middleweight contender Sergiy Derevyanchenko will battle Joshua Conley in a 10-round bout, while rising prospect Vito Mielnicki Jr. takes on Jimmy Williams in an eight-round welterweight duel, in undercard action on Saturday, July 30 from Barclays Center in Brooklyn in a Premier Boxing Champions event.

The event is topped by a Showtime Championship Boxing tripleheader headlined by two-division world champion and Brooklyn fan-favorite Danny “Swift” Garcia making his super welterweight debut against exciting contender Jose Benavidez Jr. in a 12-round showdown.

The tripleheader begins at 9 p.m. ET/6 p.m. PT and will also see Polish star and Brooklyn’s all-action Adam Kownacki returning to the ring to take on Turkish Olympian Ali Eren Demirezen in a 10-round heavyweight attraction, while unbeaten rising star Gary Antuanne Russell faces former two-division champion Rances Barthelemy in a 10-round showdown to kick off the telecast.

Tickets for the live event, which is promoted by TGB Promotions and DSG Promotions, are on sale now and can be purchased through seatgeek.com and barclayscenter.com. Tickets are also available for purchase at the American Express Box Office at Barclays Center.

A 2008 Olympian for his native Ukraine, Derevyanchenko (13-4, 10 KOs), will seek another opportunity at a middleweight world title. Known as “The Technician” and now training out of Brooklyn, Derevyanchenko is long established as a top middleweight contender, having faced the likes of Jermall Charlo, Daniel Jacobs and Gennadiy Golovkin. He owns victories over contenders including Tureano Johnson, Jack Culcay and Sam Soliman. His most recent fight was a majority decision loss to Carlos Adames last December.

Fighting out of San Bernardino, Calif., Conley (17-3-1, 11 KOs) has faced top contenders and champions at 154 and 160 pounds in challenging the likes of Julian Williams and Carlos Adames in a career that dates back to 2011. The 30-year-old has won three-straight bouts heading into July 30, including most recently besting veteran power-puncher Curtis Stevens via unanimous decision in March.

The 20-year-old Mielnicki (11-1, 7 KOs) made it three consecutive triumphs in April, as he won a dominating unanimous decision over Dan Karpency. The popular Roseland, N.J., native will return to the northeast on July 30 to make his Barclays Center debut. Mielnicki began turning heads during an exceptional amateur career where he compiled a 147-22 record and was named the Most Outstanding Boxer of the 2011 Junior National Golden Gloves, amongst many accolades before turning pro.

Fighting out of New Haven, Connecticut, Williams (18-8-2, 6 KOs) will return to fight at Barclays Center for the second-straight bout after dropping a decision to Luis Arias in May. The 35-year-old owns a victory over former world champion Yuri Foreman and has also defeated a recent opponent of Mielnicki, in Nicholas DeLomba. Williams has also challenged notable names including Abel Ramos and Brandun Lee in a career that dates back to 2013.

A press release by Showtime was used in this article.