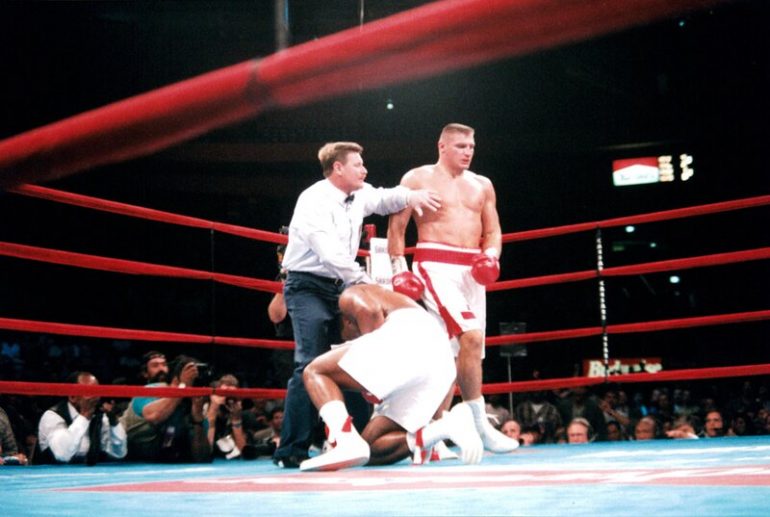 Arguably the most notorious night in modern boxing history.

On July 11, 1996, former heavyweight champion Riddick Bowe was the beneficiary of a seventh-round disqualification imposed upon Poland’s Andrew Golota at Madison Square Garden in New York. The official time was 2:33.

It was a crazy night and the craziness was just getting started.

Golota boxed beautifully in this fight, dismissing any notion that the 28-0 Warsaw native was a product of hype. He continually beat his opponent to the jab – one of Bowe’s best weapons – and followed with two-fisted flurries.

Bowe was in serious trouble before the midway point of the scheduled 10 rounder.

However, despite winning the fight going away, Golota had his own problems. Known for being a rulebreaker, the enigmatic Pole had headbutted and bitten previous opponents.

Against Bowe, his infringement of choice was the low blow.

Referee Wayne Kelly deducted points from Golota’s score in the fourth and sixth rounds for going below the belt. And the crowd of 11,252 didn’t have long to wait before the inevitable struck.

Golota floored Bowe with a pulverizing left to the groin in the seventh and Kelly disqualified him immediately.

But just as the disgraced visitor reached his corner, he was set upon by members of Team Bowe. Golota’s trainer, Lou Duva, who was in his 70s at the time, ended up flat on his back and his situation looked desperate. He was eventually stretchered out of the arena, by which time the melee had spilled out into the crowd.

There were 22 people injured, seven of whom were taken to hospital, and 16 arrests. Bowe’s manager, Rock Newman, was suspended for one year and fined $250,000 by the New York State Athletic Commission.

Bowe and Golota met again on December 14, 1996, in Atlantic City. Incredibly, Golota was disqualified for low blows again, this time in the ninth.