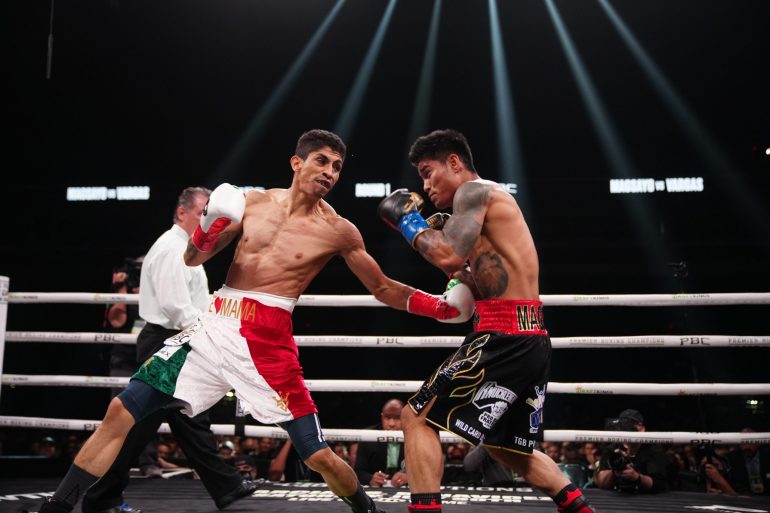 SAN ANTONIO — Rey Vargas overcame a ninth round knockdown to outpoint Mark Magsayo and win the WBC featherweight title Saturday at The Alamodome in San Antonio.

One judge scored the bout 114-113 in favor of Magsayo, while the other two had it 115-112 in favor of Vargas (36-0, 22 knockouts) of Mexico City, who previously held the WBC junior featherweight title from 2017 to 2019 before being sidelined by injuries. Magsayo-Vargas headlined a Showtime Championship Boxing broadcast.

“I’m at a loss of words. I worked hard for this. I want to thank God, my family, [trainer] Nacho [Beristain]. The first title I won, I enjoyed it greatly but this one is special. This win is for me,” said Vargas.

Magsayo (24-1, 16 KOs) started the bout strongly, landing right hands on the much taller Vargas in the first. Vargas went into cruise control in the middle rounds, using his jab and counter uppercuts to good effect as the 5’6″ Magsayo lunged forward ineffectively to get at the 5’10” 1/2 Vargas. Vargas suffered a cut on the corner of his left eye from a head clash, but the cut didn’t play a factor.

Magsayo, 27, was looking for one punch for most of the fight, and landed that shot late in the ninth, when Vargas got caught throwing an uppercut and ate a right hand. Vargas rose up, and eluded the wild lunging swings from Magsayo as he tried to finish. 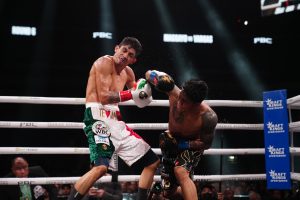 Vargas was still on unsteady legs in the tenth, but was able to survive as Magsayo looked to get inside and land with one big punch. That big punch never came again, and Vargas was able to play keep away in the twelfth to coast to victory.

“It’s this today, no matter what I’ll come back stronger, I’m disappointed but I did my best,” said Magsayo, who is promoted by Manny Pacquiao’s MP Promotions.

“I applied the pressure what we trained in the gym, but he was taller and he’s the man today.”

Punch stats favored Vargas, showing him land 196 out of 687 punches to Magsayo’s 132 out of 451 total shots, with both connecting at a 29 percent rate. Somewhat surprisingly, it was the taller Vargas who landed more body punches, 45 to 13, while Magsayo was slightly more accurate with his jab at 20 percent compared to 18 percent from Vargas.

The fight was Magsayo’s first defense of the title he won in January with a majority decision win over Gary Russell Jr. Vargas was fighting for just the second time in three years after being slowed down by leg and hand injuries.

The loss leaves the Philippines without a reigning world titleholder, though four-time world champion Donnie Nietes could possibly change that when he faces WBC junior bantamweight titleholder on July 13.