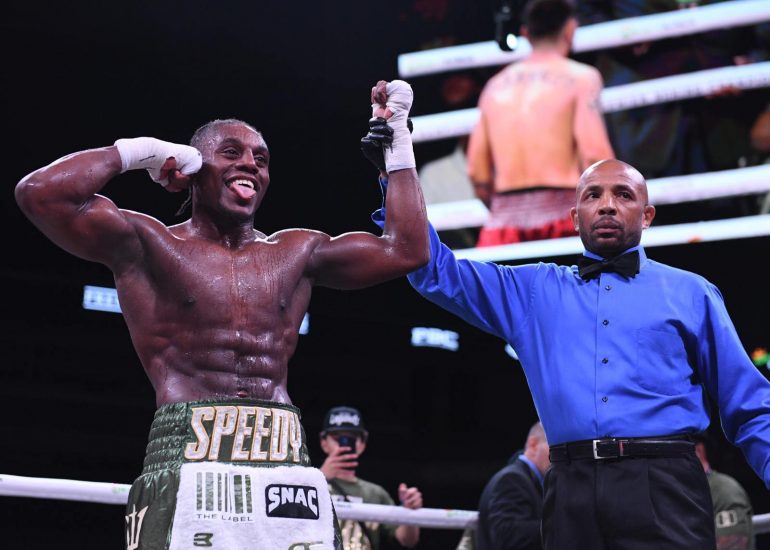 SAN ANTONIO — Rashidi Ellis lived up to his “Speedy” nickname, knocking out late replacement opponent Jose Marrufo in the first round of their junior middleweight fight at The Alamodome.

Ellis (24-0, 15 knockouts) of Lynn, Mass. dropped the overmatched Marrufo (13-11-2, 1 KO) twice before the fight was stopped at the 2:18 mark. Marrufo of Phoenix, Ariz. came in on two days notice to replace Alberto Palmetta, who made the trip to Texas but withdrew with a back injury.

The two fighters were an entire weight division apart at Friday’s weigh-in, with Marrufo weighing in under the welterweight limit while Ellis weighed in just under the junior middleweight limit.

Ellis, who was making his debut with Premier Boxing Champions, was fighting for the first time in nearly two years.

The Ellis-Marrufo fight kicked off the portion of the Mark Magsayo-Rey Vargas card which aired on the Showtime Sports YouTube channel, prior to the main broadcast.

Earlier in the card, Albert Gonzalez (3-0, 1 KO) of Perris, Calif. used his sharper counterpunching and boxing skills to outpoint the aggressive Alberto Alvarez (4-1, 3 KOs) of Simi Valley, Calif. in a four-round junior featherweight bout by the scores of 40-36 on all three cards.