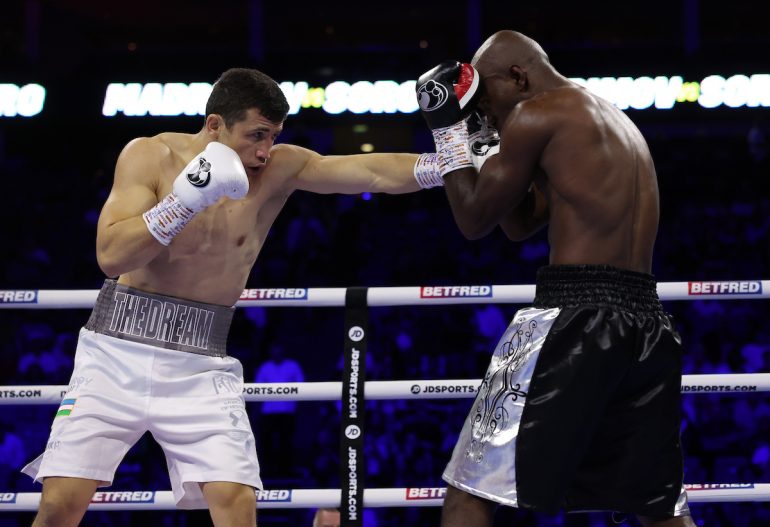 The eagerly anticipated junior middleweight rematch between Israil Madrimov and Michel Soro ended in a disappointing three-round technical draw at the O2 Arena in London on Saturday.

Madrimov, who is rated No. 8 by The Ring at 154 pounds, had the upper hand through the first two rounds. But just seconds into the third, a violent clash of heads cut Soro near the left eye and blood literally poured on to the canvas.

After consultation with the ringside physician, referee Steve Gray stopped the bout.

Uzbekistan’s Madrimov (8-0-1, 6 KOs) began the fight by thumping in the jab, up and down. He controlled distance and aimed most of his big punches towards the body. Soro maintained a high guard and went through some reconnaissance.

The action heated up significantly halfway through Round 2 when Madrimov shook his man with a well-timed right. Soro, who is rated No. 9 by The Ring, carried the damage from that shot for the remainder of the session and absorbed several more power shots.

Hopes were high for a quality fight when disaster struck seconds into the third.

The first fight between these two ended in controversy last December. Following a competitive battle, Madrimov broke through and hurt the Frenchman but his attack continued after the bell and the stoppage was marred. That set the stage for the direct rematch.

This fight was a WBA eliminator, so it’s conceivable that a third fight could be ordered.