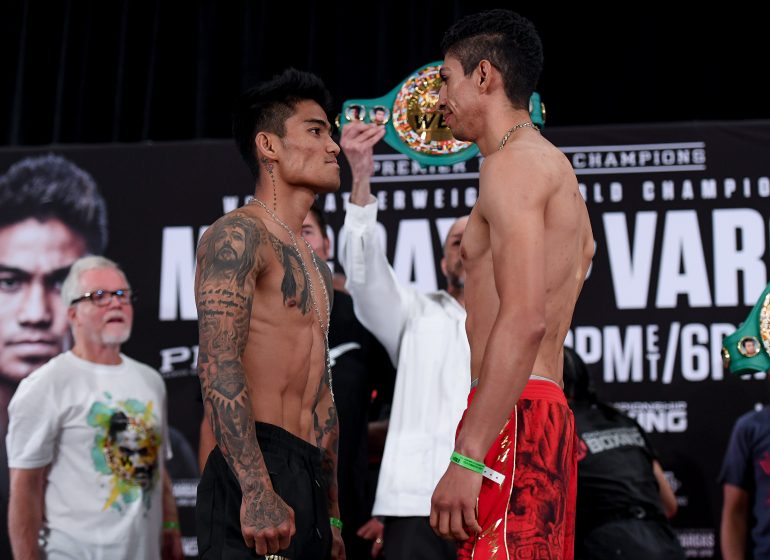 SAN ANTONIO — Mark Magsayo rushed to get in Rey Vargas’ face for the final staredown after the two made weight for their featherweight title showdown.

Magsayo, who is making his first defense of the WBC featherweight title, weighed in officially at 125.5 pounds, while Vargas, the mandatory challenger, weighed in at the same figure.

Magsayo (24-0, 16 knockouts) beat his chest as he stared down the former WBC  junior featherweight titleholder before making a throat slash gesture. Vargas just stared and posed quietly as his sizable cheering section in the back of the ballroom voiced their support.

Mark Magsayo rushed to get in @reyvargasbox’s face after the weigh-in, doing a throat slash gesture at the unbeaten Mexican in their final stare down #MagsayoVargas pic.twitter.com/6kTrjsxpXo

The fight is Magsayo’s first since he defeated Gary Russell Jr. by majority decision in January, while Vargas is fighting for just the second time in three years after having his career slowed by hand and leg injuries.

The 31-year-old Vargas (35-0, 22 KOs) of Mexico City stands nearly five inches taller than Magsayo, 27, of Tagbilaran City, Philippines at 5’10 1/2, and has a reach advantage of over two inches at 70 1/2″. Magsayo has the edge in activity in recent years, fighting five times to Vargas’ one since Vargas’ last title defense at 122 pounds.

Both fighters are led by Hall of Fame trainers, with Magsayo being guided by Freddie Roach at the Wild Card Gym in Hollywood, and Vargas being led by Nacho Beristain at the Romanza Gym in Mexico City.

The twelve-round bout will headline a Showtime Championship Boxing tripleheader from The Alamodome in San Antonio, which begins at 9 p.m. ET.

The card will kick off with the ten-round bout between Frank Martin (15-0, 11 KOs) and Jackson Marinez (19-2, 7 KOs). Martin, 27, of Indianapolis weighed in at 137.5 pounds for his Showtime debut, while Marinez of Santo Domingo, Dominican Republic weighed 138 pounds.

In the co-main event bout, Brandon Figueroa (22-1-1, 17 KOs) of Weslaco, Tex. initially missed weight for his featherweight debut, checking in at 126.2 pounds before stripping nude and making the limit for the WBC featherweight title eliminator.