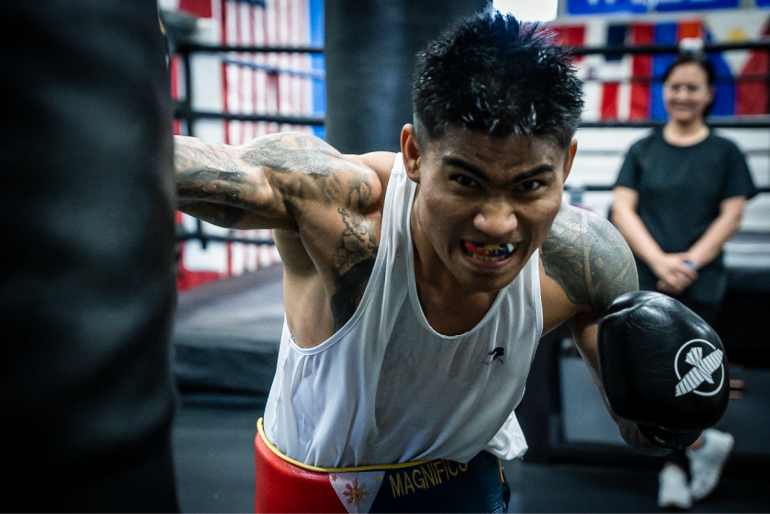 SAN ANTONIO — Mark Magsayo had a new trainer and promotion heading into his 2020 bout with Rigoberto Hermosillo. Afterwards, he knew he still needed one more piece for his team.

Magsayo had been explosive in the first round of his debut under the MP Promotions/PBC banners, but struggled to maintain his energy levels over the ten round distance, wading his way through a split decision win. His performance had him convinced it was time to abandon the featherweight division.

“My recovery was not good. Because after that weigh-in, my weight is like 132-133 pounds before I step into the ring. After that I told myself that we’re gonna move up to 130,” said Magsayo.

That’s when another boxer at the Wild Card Boxing Gym introduced him to Jeaneth Aro, an athlete turned nutritionist who has been working with some of the top athletes in the Philippines. Aro, who became acquainted with the eternal struggles of making weight as a taekwondo athlete at the University of the Philippines, remembers her days of working out excessively in sweats to make the 49-kilogram (108 pounds) limit for her own competitions, and figured there must be an easier way to make weight.

She has put her Bachelor of Science degree in Community Nutrition to good use with the boxer, overhauling his entire process of making the 126-pound weight limit. The approach factored in weight management while optimizing his energy levels for training and fight night.

“It was a little bit of adjustment because I’m not used to having scheduled meals,” says the 27-year-old Magsayo of Tagbilaran City, Philippines, who comfortably made weight on Friday for his first defense of the WBC featherweight title, checking in at 125.5 pounds for his bout against mandatory challenger Rey Vargas at The Alamodome in San Antonio, Tex. Vargas, 31, of Mexico City weighed the same.

Since linking with Aro, Magsayo says his process of making weight has improved with each fight. Whereas he’d have been 134 pounds a week before the weigh-in, and starving himself an entire day before the weigh-in, now he checks in at 129 pounds at the same point, and is able to eat up until the night before stepping on the scale.

The difference, Aro says, is that she focuses on losing fat early in camp, instead of having him struggle to cut water weight on fight week.

“The majority of the boxers that I saw, they’re not taking [weight loss] seriously. They think that they can cut weight instantly, like ten pounds in a few days. But how I do what I do, we allot ample time for his body to adjust and to adjust not only to his weight but also to his food intake,” said Aro of Quezon City, Philippines. 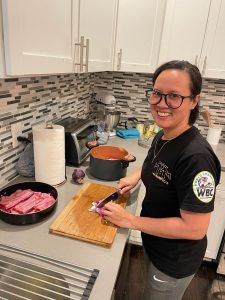 That isn’t to say that Magsayo has been limited to eating salads, however. Aro prepares food that Magsayo likes to eat, tailoring a meal plan that includes Filipino staples like bulalo, tinola, sinigang and pork adobo. That way, the fighter doesn’t see the meal adjustment as something difficult to do, but an extension of his every day habits.

One significant hurdle for the team to adjust to in their partnership was the pandemic. The Philippines has seen strict lockdowns due to the COVID-19 situation, and Aro had to coordinate meal plans and meeting weekly weight targets remotely. For his last two fights, Aro has been present for two weeks before the fight, spending much of her day cooking his daily meals at a nearby AirBnb.

Aro’s expertise became more widely known in the Philippines and around the world last year, when she worked with seven of the 19 athletes that the Philippines sent to the 2020 Olympics in Tokyo.

The results were hard to dispute: the Philippines had its most successful Olympiad ever, with three of the boxers winning medals, and Hidilyn Diaz, the 55-kilogram weight lifter, winning the country’s first ever gold medal. All were athletes whom Aro had been working with since 2017.

For his last fight, a title-winning majority decision over Gary Russell Jr., Magsayo refueled up to the middle 140s, and was able to maintain his energy levels over the 12-round distance, silencing skeptics who said he didn’t have the gas tank to fight at the elite level.

Freddie Roach, Magsayo’s Hall of Fame trainer, figures that what doesn’t hurt his boxer can’t be too bad. He’s been happy with Magsayo’s energy levels in camp, and says it’s impossible to work him too hard in the gym.

“I used to eat spinach because Popeye told me to, so I get it,” said Roach.

Magsayo has been happy with the returns.

“It’s very important that a boxer has a nutritionist because if you don’t have one, maybe you’re gonna kill yourself for nothing,” said Magsayo.