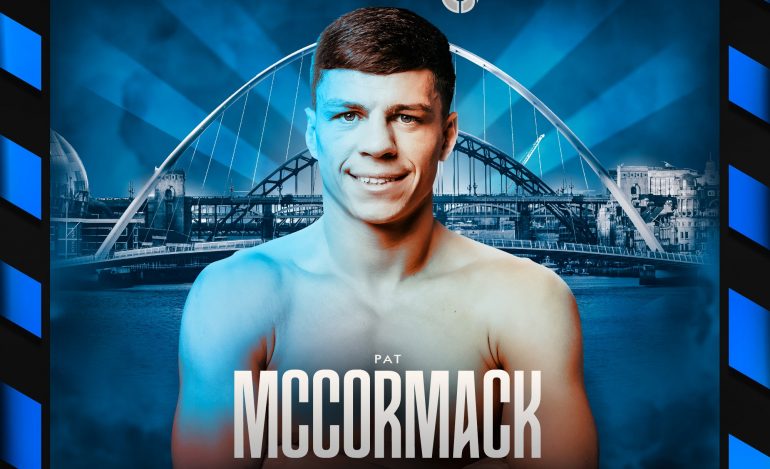 Tokyo 2020 Olympic Silver Medallist Pat McCormack (1-0, 1 KO) will go in search of his second professional victory as he joins a huge night of free-to-air boxing on Saturday July 30 at Vertu Motors Arena in Newcastle, live on Channel 5.

It was a vicious left hook to the body that halted his opponent last time out. The first-round stoppage gave the Sunderland boxer a dream professional debut that he will be looking to emulate in front of a lively Newcastle crowd.

The Super Lightweight has an unbelievable pedigree from his time in the amateurs with Team GB that has made him one of the most exciting British boxing prospects in recent memory. Alongside his Olympic Silver medal, McCormack has claimed European and Commonwealth Gold and World Silver medals. Performing for the first time on a terrestrial television, the 27-year-old cannot wait to showcase his skills and add another win to his record.

“To make my professional debut in front of all my family and friends in Newcastle was an unforgettable experience. And so, to be back home in the city, fighting in my second pro fight, is something I can’t wait for,” said McCormack.

“Being live in front of a big audience on Channel 5 is a great platform at this stage of my career, and I want to showcase what I have been working on in the gym and make a real statement.”

Fellow Sunderland boxer Josh Kelly (11-1-1, 7 KOs) leads a star studded line up in Newcastle as he returns to the ring following an impressive stoppage victory over Peter Kramer, watched by over 1 million viewers on Channel 5, to take on tough Argentinian contender Lucas Bastida (18-1-1, 10 KOs).

Straight out of Rocky IV, Heavyweight ‘Drago’ Steve Robinson (4-1, 3 KOs) will be hunting for another blockbuster finish when the 6’7” giant from Newcastle looks to provide a finish worthy of his nickname.

The stage is set for Newcastle’s Jordan Barker-Porter (3-1) to make it three-straight wins as the 28-year-old Lightweight returns to action in her home city.

Darlington’s Ben Marksby (4-0) can continue his undefeated streak at Super Lightweight as he fights for the first time in the North East, while future prospect Kai Richmond (1-0) will aim to pick up where he left off after a comprehensive professional debut for the 22-year-old from Spennymoor earlier this year.

Tickets for Wasserman Boxing’s North East takeover are on sale now, priced £40, £80, £100 and £200, and available via www.wassermanboxing.com.