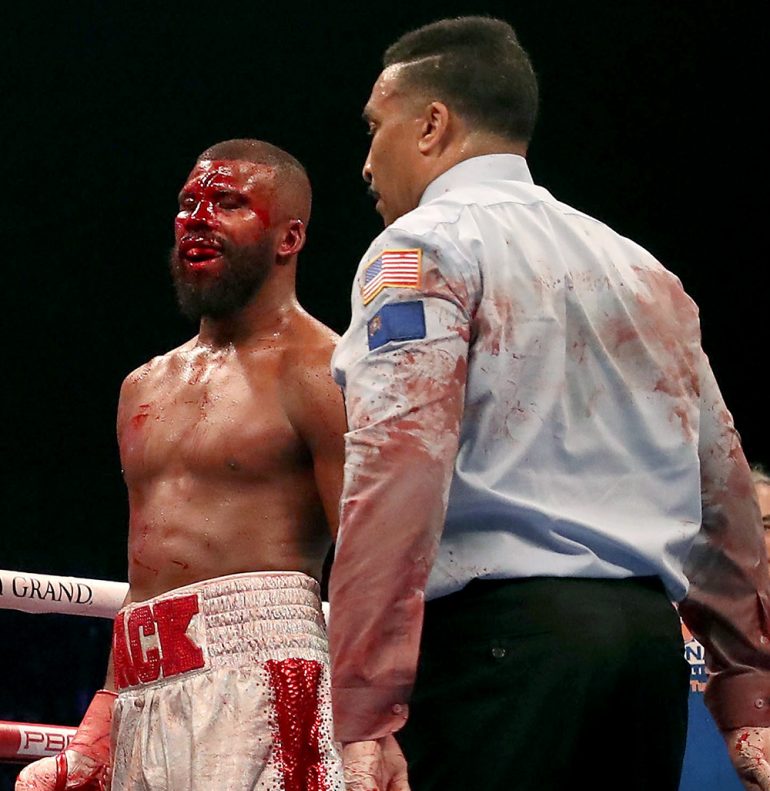 Referee Tony Weeks says he might donate one of boxing’s most famous officiating shirts to the International Boxing Hall of Fame.

He was the third man for the bloody battle that saw Marcus Browne split open the centre of Badou Jack’s head in January 2019, which turned Weeks into an immortal meme of how you don’t play boxing.

“That was the worst cut that I ever seen, that I’ve been involved with,” admitted Weeks, in a long ranging interview on the Boxing Life Stories podcast. “It was right down the middle of his head. The good thing about it, if you will, was that because it was in the middle of his head the blood was running down the sides of his nose and not getting in his eye but it was a gruesome cut.”

Did he wash the shirt?

“No. I tried to wash a little bit off after the fight but the blood is still there and I’ve still got it. Hopefully I can donate it here at the Hall of Fame. I’ll speak to the Brophys about doing it. I’ve got it sealed in a container.”

That fight was on the Manny Pacquiao-Adrien Broner bill, and Weeks has become a staple of the big nights in Vegas over the years. In fact, he refereed one of the greatest bouts of all time, when Diego Corrales came back to stun Jose Luis Castillo in their epic first encounter.
Weeks was proud of the fighters and his own role on that historic night.

“After the second knockdown I’m thinking he [Corrales]’s probably done because Castillo is a hard precision-type puncher and then when the fight turned around with one shot it was unbelievable,” Weeks recalled.

“One minute I’m looking at stopping it with Corrales and the next minute it’s over, with Castillo getting stopped against the ropes. A lot of things cross your mind in a fight but when you’re doing it at real time you can’t really grasp what’s happening but you know that you’re in something special.”

Of course, the life of a referee is varied and as many great fights as Tony has seen, he has also witnessed the darkest side of the sport.

He was the referee the night Leavander Johsnon lost to Jesus Chavez, and Leavander later died from injuries he sustained in the fight.

“It’s definitely not good memories,” Weeks admitted. “I remember him being in the fight but then he started to take punishment and when I finally stopped it, he didn’t collapse in the ring. He went back to the locker-room and I heard that’s when he collapsed…. A fight like that, the damage could have happened in the first round… When something traumatic like that happens, you don’t know, you always look back and question yourself.”

Weeks visited Johnson twice in hospital before Leavander passed away. He saw him hooked up to the machines were keeping him alive and the tubes that were allowing him to breathe.