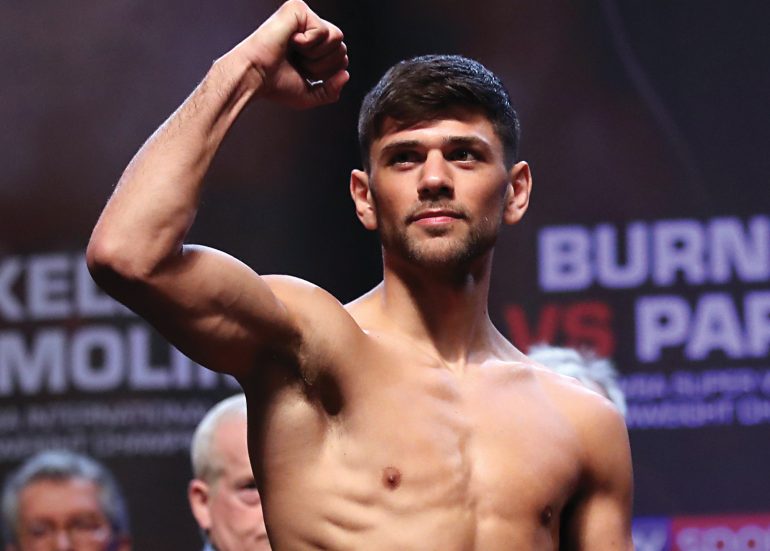 Joe Cordina during the weigh in at the Motorpoint Arena, Cardiff. Photo by Nick Potts/ PA Images via Getty Images
06
Jul
by Anson Wainwright

It’s just over a month since Joe Cordina sensationally knocked out Kenichi Ogawa in two rounds to became the IBF junior lightweight titleholder.

Although Cordina has had time to reflect on achieving his dream, the fame and adulation that have come with this victory is all new to him.

Although he’s received his share of plaudits, the newly minted titleholder is intent on keeping his feet on the ground.

“I’m still washing the dishes, taking the kids to school and doing the shopping,” Cordina admitted. “I wouldn’t change it anyway. Regardless of how big I got, I’d still be doing all that stuff.

“Two days after, I was sitting outside my mum’s [house] with all the neighbors, my nephew, my mates and I was just chilling. I wasn’t doing anything I wouldn’t have previously. I’m Joe with a title of ‘world champion.'”

Cordina celebrated his win at a hotel due to an admin error which prevented several close family members and friends being allowed into a local nightclub. The next day he attended the Wales-Ukraine World Cup play-off in soccer.

“It was quite exhausting, I didn’t sleep a wink, it felt like the football was lagging,” Cordina laughed. “I did enjoy it. I was going as a fan. I wanted to see Wales get to the World Cup – it was a big game for us. They also paraded me on [to the pitch] at half-time which was great. I was just gutted I didn’t have the belts. It was a memorable weekend for Welsh sport.”

Not surprisingly, things have began to change in the life of British boxing’s latest champion.

“I saw an interview David Beckham did – and no way am I saying I’m anywhere near him – but he said, ‘You get to a point where you’re able to buy things and then things start to get given to you.’ That seems to be what’s happening to me.”

When Cordina looks back at the Ogawa triumph, he’s particularly satisfied because it was the culmination of many years of hard work.

“I wasn’t going in there expecting to catch him first time. I was only going to get my distance, [but] he didn’t move, he was there, and I took it,” Cordina said of the knockout. “Me and [trainer] Tony [Sims] were working on that shot all camp. It was two shots: feint to the body and come back with back hand; feint to the body, come up with a left hook. We knew his style; he jumps back and sits on his heels and doesn’t move his head. He’s open for those shots.

“When I threw it, I knew he was gone. It was a shot we practiced plenty of times and it was so satisfying when I watch it back. All those hours of training and practicing paid off.”

The knockout was all the more impressive given that Cordina, who has a 60-percent knockout ratio, isn’t a noted puncher.

However, the Welshman feels there are mitigating factors in his middling knockout record.

“People said when I stepped up levels, I’m not a puncher,” he said before explaining. “I’ve fought four times with damaged metacarpals. After my operation, my first fight back, I neglected to throw it because I wasn’t sure how it would feel. In my last three fights, two of them went to sleep.

“Speed is power and I’ve got speed and timing. With all that together I become a big puncher. I know for a fact I carry power, but will never go out there and say I’m a one-punch KO artist and that I’m a big puncher. I’ll always try to stick to my boxing. I train for 12 rounds and that’s what I plan on doing. I don’t look for a knockout. If it’s there, like you saw, I take it.”

Cordina, who is currently on holiday in Malta for two weeks, says he’ll briefly return home before driving 200 miles to training camp in Essex.

“Shakur Stevenson shouted me out, then I saw he announced he’s fighting [Robson] Conceicao,” he said. “I’m pretty disappointed in that. I thought he would have pushed for [us to fight]. I was happy to take it. He posted [on Twitter,] this is the only fight to make in the junior lightweight division. I said, ‘Let me have my break and we’ll talk.’

“He’s the unified champion, but at the same time, I’ve got something he needs. I’m going to make money regardless. I know that’s a big-money fight. Don’t act like you want the fight and fight someone else. Don’t get me wrong, I’m not saying he doesn’t want the fight, but don’t call me out, I’m accepting, then go elsewhere. It’s just one of those things. I’m sure it’ll happen down the line, but he’s got to keep the belts and I’ve got to keep my belt.”

Cordina expects to defend his title in the fall and then hopes to face Stevenson.