Mikaela Mayer: Every fight is the biggest fight of my career 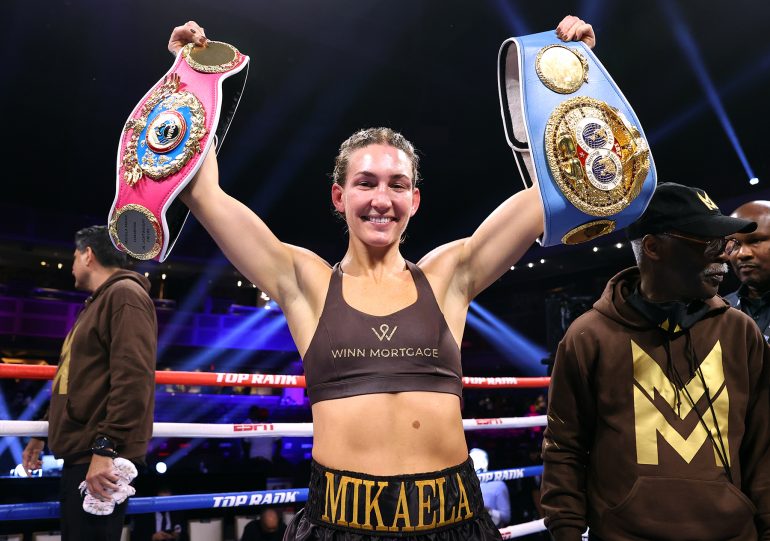 If your birthday falls on a national holiday, you’d think you’d have two very valid reasons to celebrate, and an equal number of reasons to take the day off.

Unless you’re a top pound-for-pound fighter with an upcoming fight in what looms as the biggest women’s boxing doubleheader in history.

“Yesterday I started my training camp, spent my birthday working out,” said Mikaela Mayer, born on the US Independence Day holiday of July 4th some 32 years ago, in a teleconference in which she was supposed to share the spotlight with Alycia Baumgardner until it became clear that her fellow 130-pound titlist was a no-show. “I am excited, it’s such a great event. I am all about putting on a show and entertaining and giving the fans the fights they want to see, and that’s one of the reasons I pushed so hard to get this fight done this year.”

A great show will indeed be had by those who tune in on September 10 to either ESPN+ or Sky Sports, depending on which side of the pond they reside. On that day, one of the most anticipated women’s fights of all time will happen at The O2 Arena in London, where a grudge match between two-division Ring champion Claressa Shields and her nemesis and sole conqueror so far Savannah Marshall will take place.

But that fight, with all the bad blood and the trash talk that it has already generated, could easily end up being upstaged by the co-main event in which Mayer (17-0, 5 knockouts) will risk her Ring/IBF/WBO belts against Baumgardner (12-1, 7 KOs), her current WBC counterpart in the division.

Mayer said that the fight wouldn’t be taking place if it wasn’t for her insistence on getting it done once and for all.

“She didn’t want the fight,” said Mayer about her next foe. “She told the press and everyone over and over again that ‘Mikaela will have to wait,’ but that’s not what women’s boxing needs. She really hasn’t done shit yet. She just hasn’t. Terri Harper wasn’t that big of a test. Her biggest test was (Christina) Linardatou, and she failed, so she still has a lot to prove in my eyes.” 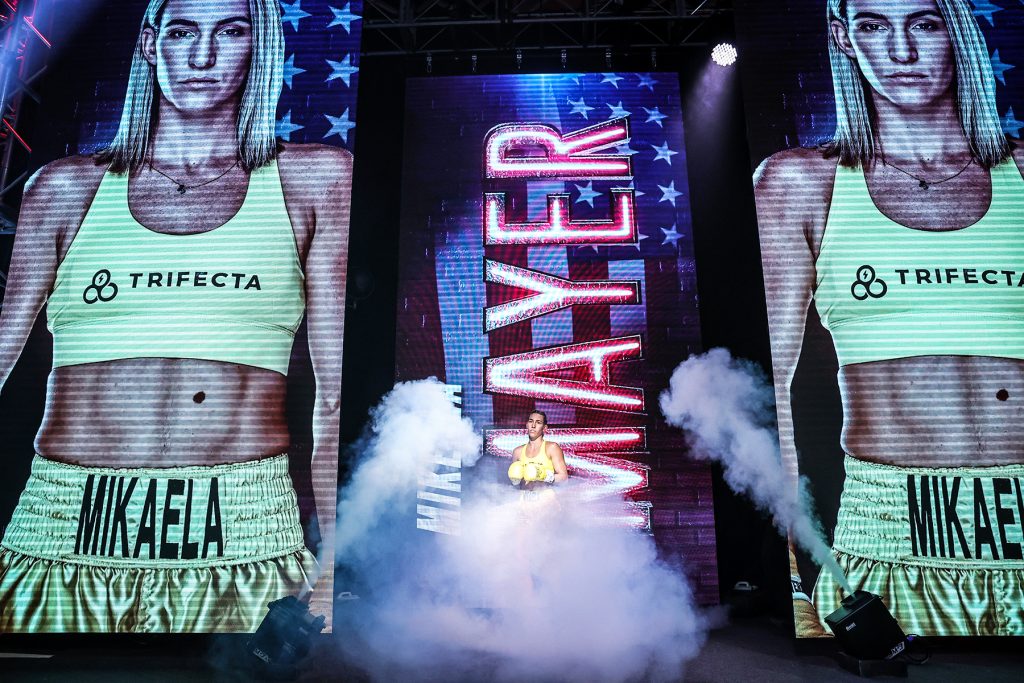 Mayer’s assessment of her own career gives her the notion that she is the one with the most to lose in this fight, given her current status as the A-side.

Even though Mayer-Baumgardner would have generated enough support to become a main event in its own right one day, Mayer feels that this type of risk is what it takes to move the sport forward as a whole.

“This is the type of vision I definitely had for the sport, but I never envisioned doing something this awesome and this unique, joining the stage with Shields and Marshall. When they first brought this to my attention and said ‘what do you think of this possibility?’ Contrary to what people might think, that I don’t want it because me against Baumgardner is main-event worthy, that was not the case. When I heard that this (event) was a possibility I said yes, yes, yes. Absolutely we had to make this happen. And I think it’s a one-stop show for the fans, and that’s what it’s all about.”

Getting out of her comfort zone and taking her show abroad feels like the right additional step to show the world that bigger rewards call for greater risks.

“A lot of people think that Mayer-Baumgardner should (take place) in the U.S., because we’re both American, but what they don’t understand is that boxing is thriving in the UK, and women’s boxing especially,” said Mayer. “And as the business woman that I am, it is only smart enough to go and get in front of that market. The US is a very, very difficult market, and while we continue on that quest, it is only smart of us to continue to grow our brand in countries where they have already stepped up to the plate when it comes to accepting women into the sport.”

Mayer-Baumgardner is the product of a months-long negotiation between two camps, which took place simultaneously with a war of words in the Twitterverse, where both fighters engaged in more than a few tense exchanges.

Mayer said that this is not only her plan for every fight, but rather her trademark as well.

“I’ve done what I’ve always done, and that’s chase the champions. That’s what I’ve always done. Me and (former WBC titlist) Terry Harper had a rivalry building up before she got beaten by Baumgardner, and now that Baumgardner is in that position I am going to come for her, and that’s the way it is. She seems to take it very personally, like I am trying to steal her shine or make it all about me, but obviously she didn’t have the same championship mindset that I’ve always had, and that’s fight the best. She told everyone that ‘Mikaela is going to have to wait, she’s going to have to come to me, blah blah blah,’ and now look, I made this fight happen six months after she got the title, and it’s on ESPN and Sky Sports. My networks, not hers, Mayer versus Baumgardner, like I said it would be.” 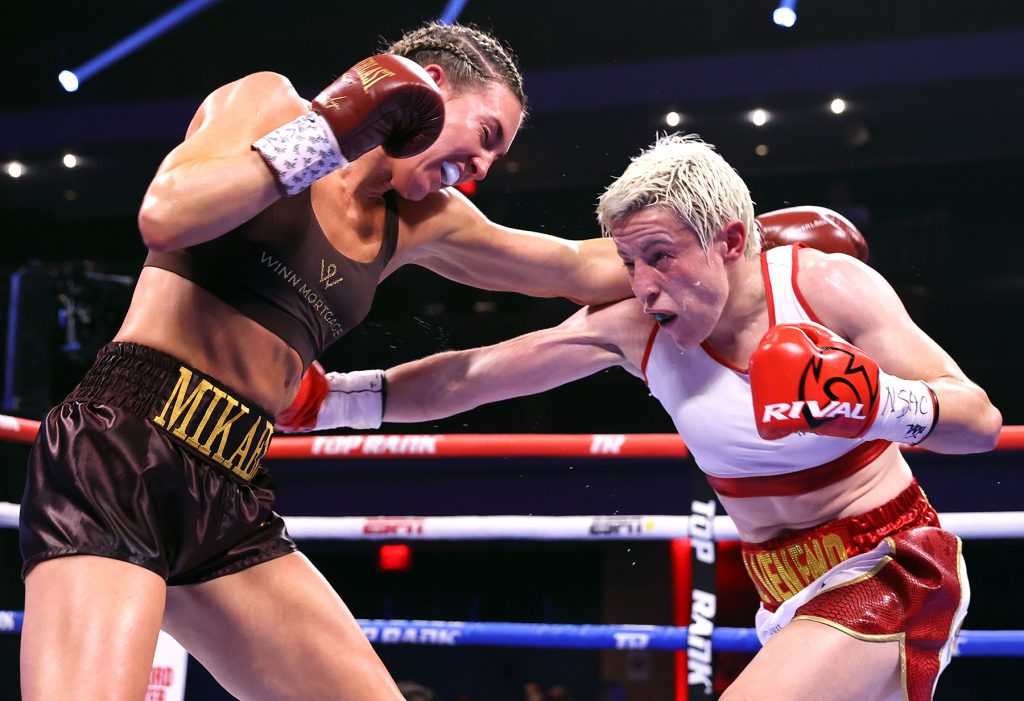 The bout was finally made when it became clear that the weakest of all major titlists, South Korea’s Hyun Mi Choi, was determined to never facing either Mayer or Baumgardner, if we take into account Choi’s extravagant demands for a unification bout.

“Choi needs to be stripped of her belt,” said Mayer, blaming the North Korea-born current WBA titlist who defected to South Korea at an early age. “She does nothing for this era of women’s boxing. She doesn’t fight anybody, she fights sub-par opponents, and she is holding back this division and holding back women in this sport as a whole. I think she should be stripped. It’s ridiculous that none of us can make a fight with her. If she was a true champion she would want to put her ass on the line, and take meaningful fights. And she doesn’t.”

Another reason to expedite her unification bout against Baumgardner was mentioned by Mayer.

“I was going to get Baumgardner this year, because I am going up (in weight). Same thing with Choi. I am going to get to 135 (pounds) no later than February, 2023,” said Mayer, before offering an assessment on her foe’s virtues and flaws.

“I am not saying she’s not a good fighter. She does what she does well. But she does that only. She’s a very one-dimensional fighter. I had my tests. Baumgardner has not. She has not been tested, and when she was, she lost. I know that if she wants to box with me I will be in my comfort zone. I know now that if she wants to fight on the inside, with the experience that I have, I will be in my comfort zone too. She can’t say that. She needs to keep her opponents at bay and do what she does, and she’s never had someone step up to her and take her to the deep waters, and that’s what I am going to do to her. And she won’t know how to handle it.”

“Coach Al (Mitchell) always asked me ‘did you ever think you’d be here? That you’d come this far?’ And I always said ‘yes!’. I always believed that I was going to have this type of career, I always believed that. But I understand why so many people wouldn’t. I had a vision that other people couldn’t see, and that’s why I am where I am today. It has come so far, and I am so happy to be a part of this era of women’s boxing. And this card is an example of that, having two of the best women’s fights at the same time, and I don’t think women’s boxing will ever disappear again. And I say ‘again’ because it did after that era with Mia St. John and Laila Ali and Christy Martin, when there was like a whole decade in which women’s boxing wasn’t even a thing. We’re back for good.”