On this day: Gennadiy Golovkin sticks to the ribs of Matthew Macklin 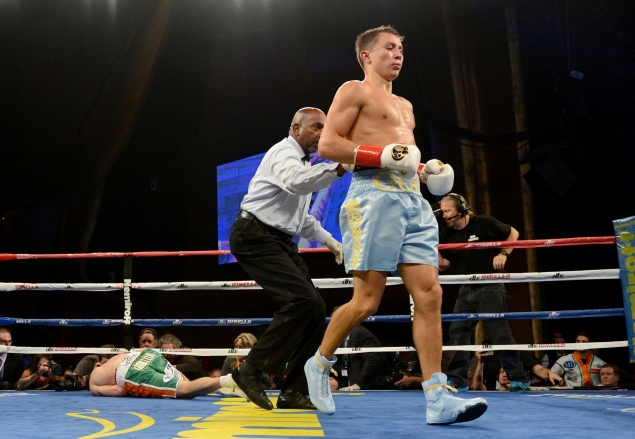 You wouldn’t have wished this one on your worst enemy.

On June 29, 2013, middleweight destroyer Gennadiy Golovkin scored a crushing third-round knockout of Matthew Macklin at the MGM Grand at Foxwoods in Mashantucket, Connecticut. The official time was 1:22.

Golovkin entered the bout with a 26-0 (23 KOs) record and his previous 13 fights, over a five-year period, had ended inside the distance. Legitimately feared by some of the world’s best middleweights, GGG caused destruction wherever he went.

Macklin (29-4, 20 KOs) was a solid campaigner who had pushed both Felix Sturm and Sergio Martinez hard in world title bouts. While Ring champion Martinez had stopped Macklin in 11 rounds, the Englishman was deemed very unlucky to have dropped a split decision to Sturm in a WBA title bout.

Nothing he’d experienced previously could prepare him for this.

Golovkin landed heavy artillery early and often. Big right hands visibly shook Macklin in the first and the same shot produced a cut around his left eye in the second.

Realizing that a tactical approach was useless, Macklin gamely let his hands go early in Round 3 and enjoyed some success. However, Golovkin continued to apply pressure with his feet and he quickly trapped his man against the ropes. Two throwaway head shots provided a distraction before Golovkin placed a perfect look to the body which dropped Macklin to his knees and then on to his stomach for the count.

The leverage GGG generated and the precision and accuracy of that finishing shot resulted in two broken ribs for Macklin.