On this day: Mike Tyson shocks the world, disqualified for double-bite on Evander Holyfield 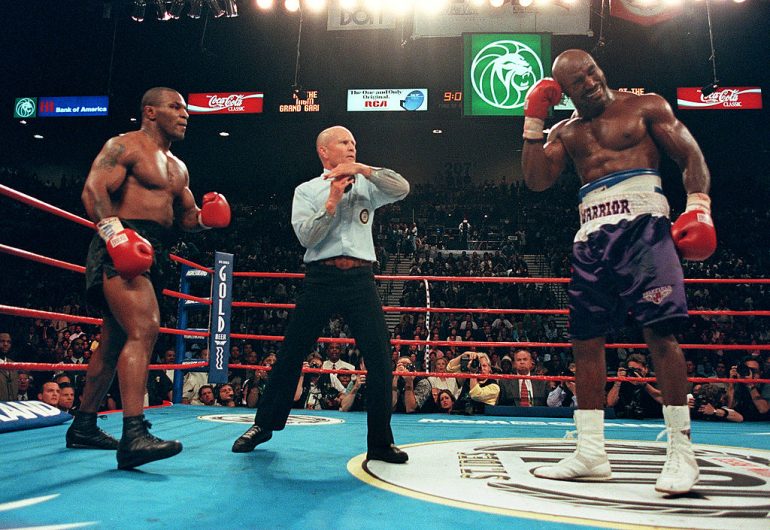 Time heals everything, and there’s perhaps no greater example of that than “The Bite Fight.”

On June 28, 1997, Evander Holyfield retained the WBA heavyweight title via third-round disqualification, after Mike Tyson bit both of his ears on an insane night at the MGM Grand in Las Vegas.

Holyfield had stunned Tyson eight months earlier at the same location, overcoming huge odds to score an unforgettable 11th-round stoppage. The rematch was a natural, and financially speaking, Holyfield-Tyson 2 was the biggest heavyweight championship fight to date.

The first two rounds were competitive, with a slight edge to Holyfield. Tyson, however, was cut above the right eye following a clash of heads in Round 2 and he complained sternly to referee Mills Lane. Lane ruled an “accidental head butt” and the action resumed.

As the bell rang for Round 3, Tyson came out of his corner without his mouthpiece. Holyfield spotted this from across the ring and signaled to both Tyson and Lane to get it inserted. Trainer Richie Giachetti took care of that.

The ironic thing about what followed is that Tyson was enjoying his best moments of the fight. The former champ flew at Holyfield with a powerful combination and also landed a pair of left hooks and a big right hand. Undeterred, Holyfield backed his man off with the jab, but when the fighters drifted inside, the heads touched again and all hell broke loose.

Tyson bared his teeth and bit down hard on Holyfield’s right ear. “The Real Deal,” now campaigning as “The Warrior,” jumped three feet in the air, stepped toward Tyson, then changed direction and headed toward his corner for assistance. As he did so, Tyson ran across the ring and pushed him from behind.

With Holyfield yelling “He bit my ear!” over and over, Lane seriously considered an immediate disqualification. However, after being told by the ringside physician, Dr. Flip Homansky, that Holyfield could continue, Lane decided upon a two-point deduction. 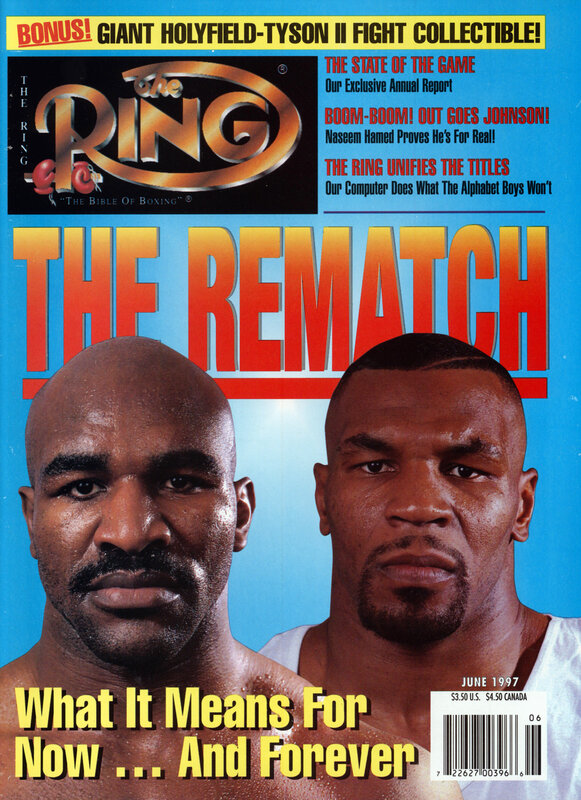 By this point, the habitually poker-faced Holyfield wore a serious game face – perhaps death stare is more accurate. Who could blame him? On the other hand, Tyson looked positively unhinged, which he clearly was.

Shortly after the action resumed, Tyson bit Holyfield’s left ear – which was missed by Lane – and both fighters swung killer blows at one another. The bell rang to end perhaps the craziest round in boxing history, and when replays confirmed a second bite, Lane disqualified Tyson immediately.

Bedlam ensued with Tyson taking swings at Holyfield’s Team, his own team, MGM Grand security detail and even a couple of police officers.

When all the craziness calmed down somewhat, the former champion was interviewed by Showtime’s Jim Gray outside his dressing room.

“This guy keeps butting me, he’s trying to get me stopped on cuts, I’ve got to retaliate,” stated Tyson in earnest.

“I complained that he butted me, and we complained about it [after] the first fight. Listen, Holyfield’s not the tough warrior everyone says he is, he’s got little nicks on his ears and he quit.”

Holyfield never quit in his life.

Gray then requested that Tyson address the bites.

“I did address it, I addressed it in the ring,” was the unfortunate response.

Following their first encounter, Team Tyson made mention of Holyfield being reckless with his head on the inside. The protest made sense because Holyfield did have history. However, Tyson had also led with his head in the first Holyfield fight and wasn’t exactly known as the cleanest of fighters himself.

Regardless, biting is never an acceptable response inside a boxing ring.

This was the first time a fighter was disqualified in a heavyweight championship fight since Buddy Baer was thrown out of his first bout with Joe Louis in May 1941. Tyson was fined 10 percent of his $30 million dollar purse by the Nevada State Athletic Commission and banned for 12 months.

The first fight was a triumph but the rematch was a disaster. The incident is often mocked and made fun of now, but it’s difficult to overstate the enormous amount of negativity that surrounded the sport for months afterwards. The one good thing that came out of it was Holyfield and Tyson did become friends in the years that followed.