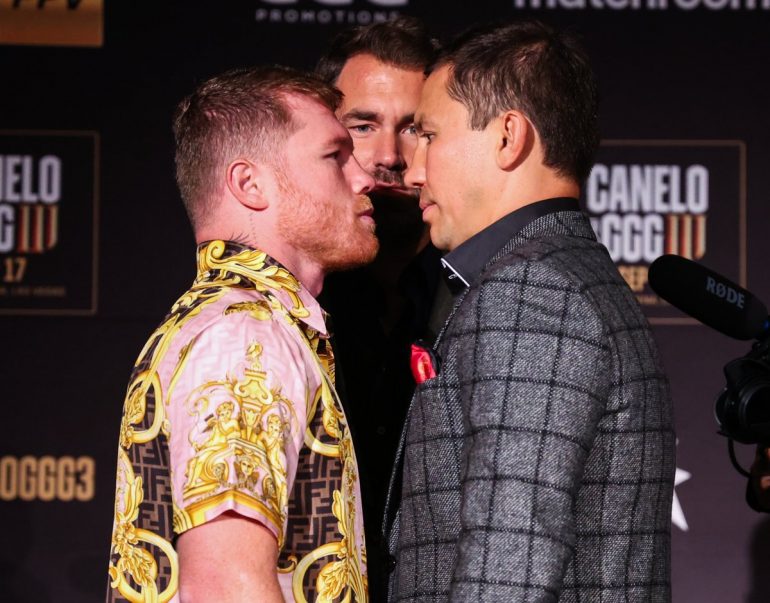 Canelo Alvarez and Gennadiy Golovkin don’t like each other. That much is evident through the years between the two great fighters.

Alvarez (57-2-2, 39 knockouts) will be rebounding off the second loss of his career in the May setback to WBA light heavyweight titlist Dmitry Bivol, while Golovkin (42-1-1, 37 KO) will be looking to prove he’s the better fighter than the future Hall of Famer when they meet a third time on Sept. 17 at the T-Mobile Arena in a DAZN pay-per-view event, promoted by Eddie Hearn’s Matchroom Promotions.

Alvarez, The Ring and undisputed super middleweight world champion, and Golovkin met in New York on Monday for the last press conference to kickoff the megafight.

Their staredown looked like a simmering volcano about to explode.

When challenged by Hearn in broaching Golovkin’s allegations of the past toward Alvarez, like calling him a “cheater,” “low class,” that he “wants to punish him,” Golovkin seemed to walk away from those words.

The 40-year-old from Kazakhstan holds the IBF and WBA middleweight titles and will be fighting for the first time at 168. His only loss was by majority decision to Alvarez in September 2018, after the pair fought to a split-draw in September 2017.

“But September 17 is coming, and whatever unfinished business we have, we’re going to meet each other in the ring and resolve it.”

As Golovkin was talking, Alvarez just stared ahead. The Bivol defeat seems like it put Alvarez on reset. There is a new fuel circulating through him.

Jonathan Banks, the trainer for “GGG,” said the right things and stressed the calm on the GGG side of the room comes from the confidence GGG has in himself.

Alvarez and his trainer and manager, Eddy Reynoso, sat on the right of the dais in a stoic manner.

“Without a doubt, it’s going to be a very tough fight, like the first two fights, and we’re coming off a loss,” Reynoso said. “That will make it more intense and Canelo wants to fight stronger and with more dedication. We want to win by knockout.

“We’re coming off a loss and this is going to make us improve even more.”

Alvarez wore a look like he wanted to take GGG’s head off right there.

“I like to respect my opponent when they respect me,” Alvarez said. “This is the person I am. I’m not going to try to be another person. Right now, this is the press conference and I’m going to prepare myself in the gym 100-percent, like a beast and I wish September 17th was today.

“He’s a dangerous fighter. He’s a good fighter, no doubt about that. If you want something, you need to risk and I’m able to risk something to accomplish what I want. That’s my goal for this fight, and he’s going to know I’m different. I’m more strong and more mature.

“I don’t want this fight to go the distance. This will be the best fight of the three.”