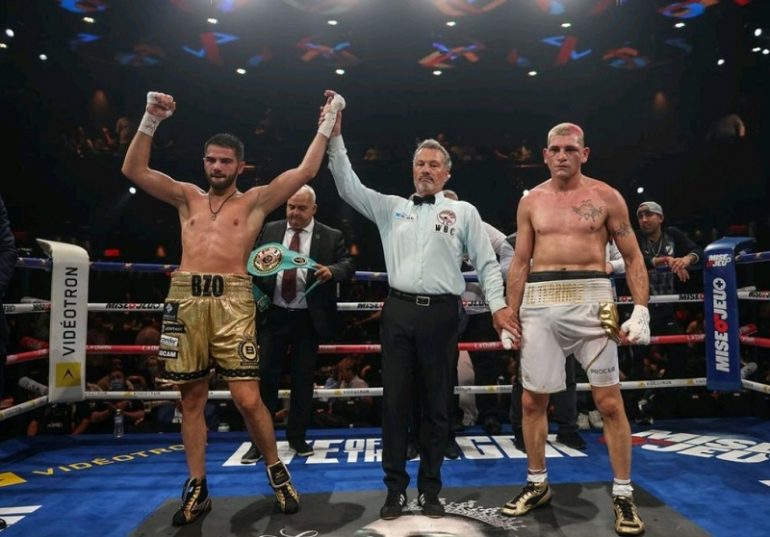 Bazinyan, who is ranked No. 9 by The Ring at 168-pounds, boxed well in the early going behind an educated jab.

However the experienced Argentine came on well in the second half and had his successes. The visitor notably landed a strong combination in the eighth that Bazinyan answered with a snapping left hand. The fight appeared in the balance entering the final round.

When the scorecards came in Bazinyan was awarded the 10-round unanimous decision by surprisingly wide scores: 100-90 and 98-92 twice. There were no complaints from Coceres’ team, who later conceded they also thought Bazinyan won but by a closer margin.

The win moves Bazinyan to 28-0 with 21 knockouts and in line for something bigger in the fall, while Coceres (30-4-1, 16 KOs) will head home and look to regroup.

There was no warming up as both men went straight at each other from the opening bell. The first few rounds were fast-paced with plenty of action. However Butler’s youth (11 years younger than Brewer) and freshness prevailed, in no small part due to his heavier hands.

As the rounds passed, Butler, who is a hot and cold fighter, landed the heavier shots and hurt Brewer in each of the last three rounds. The New Brunswick man was as game as they come and refused to go down and looked to fire back when he could but was outgunned.

When the scorecards came in, Butler won a lopsided decision 100-89, 100-90 and 99-90. The win puts Butler back into contention, while Brewer, who works a day job as a realtor will have a long road back.

Slick switch-hitter and junior welterweight Yves Ulysse Jr. (21-2, 12 KOs) returned from a near-year-long hiatus to stop Reuquen Facundo Arce (14-7-2, 7 KOs) in the third round. Ulysse boxed a disciplined fight on the outside before stepping things up and hurting his Argentine opponent midway through the third round. He turned up the heat and forced Arce to seek solace on the canvas, where he was counted out at a 1:59 of the third round.

Spencer sent out a statement of intent to the welterweight and junior middleweight division with a clinical performance, showcasing her impressive power against the vastly more experienced Namus, who, in her previous fight, had challenged for the vacant WBO title.

Jardon, 34, dropped Oganesyan in the opening round and continued to outwork and outhustle Oganesyan, who was unable to blunt the aggressive Mexican’s attack. Jardon barrelled forward and, while not always pretty, was effective. The fast pace made life suitably difficult for Oganesyan, who was devoid of ideas.

Oganesyan looked sorry for himself by the midway point and was unable to land anything that would change the course of the fight. Jardon bullied and suffocated the space, preventing Oganesyan from having any significant success. At the end of the fight, Jardon was awarded the decision by scores of 98-91, 97-92 and 95-94. It was later revealed that Oganesyan went to hospital and may be suffering from a concussion.

This was a harsh lesson for 22-year-old Russian-born Canada resident and shows there is much work to do. While Jardon, who challenged for the WBC 130-pound title in 2013, breathed new life into his own career.

In the junior lightweight division, Avery Martin Duval (7-0-1, 4 KOs) was made to work for the win by Luis Reyes Carmona (9-2-1, 2 KOs) over six hard-fought rounds. Duval was awarded the decision by scores of 58-56 on all three scorecards.

Luis Santana (6-0, 2 KOs) beat Sergio Hernandez Cruz (8-1-1, 6 KOs) in a lively six-round battle of unbeaten junior welterweights. Santana stunned Hernandez in the second round but had his nose bloodied as he showed signs of wear and tear. Both exchanged shots for the remainder of the fight but Santana’s great accuracy saw him claim the decision. All three judges scored the contest 60-54.

Leila Beaudoin (6-0, 1 KO) continued her progress in the junior lightweight division with an impressive display of boxing over Amel Anouar (2-3-1). Beaudoin used her jab to good effect throughout the fight and notably hurt her French opponent in the fifth round with a bodyshot. Ultimately she had to settle for a six-round unanimous decision, 60-54 on all three scorecards.

In the opening fight of the night Hamza Khabbaz (4-0, 1 KO) outpointed tough journeyman Marco Chino Villa (3-7) over four rounds at welterweight. Khabbaz was awarded the unanimous decision by scores of 40-35 twice and 39-36.