Donovan, Walker and Molloy to appear in Conlan-Marriaga undercard in Belfast 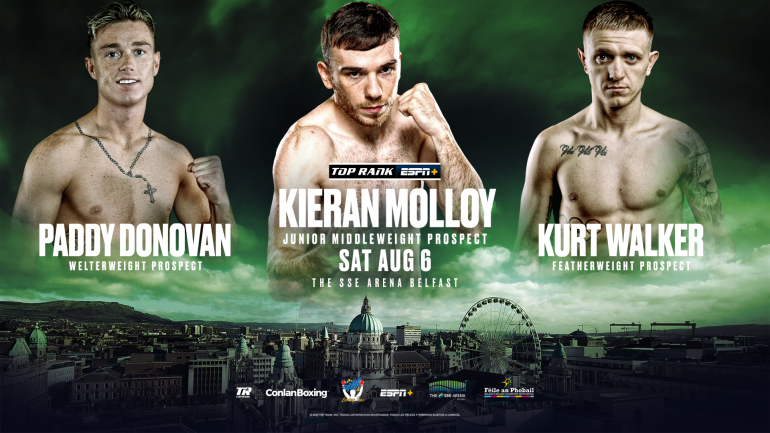 Donovan will appear in his first scheduled eight-rounder, while Walker and Molloy will see action in separate six-rounders. All three bouts will stream live and exclusively in the U.S. on ESPN+. The ESPN+ stream is also scheduled to include Belfast native Padraig McCrory (13-0, 7 KOs) in a super middleweight 10-rounder versus former world title challenger Marco Antonio Periban (26-5-1, 17 KOs).

Donovan (8-0, 6 KOs), from Limerick, Ireland, is trained and managed by former middleweight world champion Andy Lee. The stylish southpaw last fought on the Josh Taylor-Jack Catterall undercard in February, knocking out Miroslav Serban in six rounds. Donovan has been out of action rehabbing a hand injury.

Walker (2-0, 1 KO), from Lisburn, Northern Ireland, turned pro with a first-round knockout on the Taylor-Catterall card, a highly anticipated debut following an amateur run that included a gold medal at the 2019 European Games. He returned April 23 on the Tyson Fury-Dillian Whyte undercard at Wembley Stadium, where he won a four-round decision over Stefan Nicolae.

Molloy (1-0, 1 KO), a native of Galway, Ireland, also turned pro on the Taylor-Catterall bill and notched a second-round stoppage over Damian Esquisabel. He was scheduled to fight June 18 on the Artur Beterbiev-Joe Smith Jr. undercard, but his opponent tested positive for COVID-19 during fight week. Molloy signed a professional contract with Top Rank after winning an Irish national title last October.