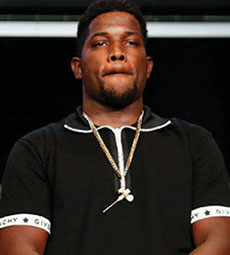 It’s been two months since Erickson Lubin’s face was distorted to almost unrecognisable levels in a Fight of the Year contender against Sebastian Fundora.

Lubin was withdrawn after nine rounds of action, with both fighters having tasted the canvas in their Las Vegas war. He’d sustained damage to his right shoulder, cracked his nose bone and there was swelling over and under both eyes.

But it was a fight that saw the stock rise of both competitors. Fundora displayed that he could hang with some of the division’s best while Lubin showed there was plenty of substance behind his dreams of becoming one of the top fighters in the world.

His only previous defeat was a one-round loss to Jermell Charlo, and after that he wanted to shut himself away. After losing to Fundora, he has received little but adulation.

“That was different for me,” admitted the 26-year-old. “That whole fight was just different for me. I didn’t know that I’d get so much praise afterwards, but the way it went, people know where my heart is. They know what type of fighter I am they know the skills and abilities I have, so people respect it, I guess.”

He knew it was going to be explosive, too, because of the blend in styles and sizes. He knew he’d have to put himself in harm’s way to get inside on the 6ft 5 1/2ins Fundora.

“I did [expect fireworks], because I knew how he fought,” Lubin continued. “I knew he was a straightforward fighter who throws a lot of punches and I know he comes in shape, so it was something where I had to adjust to and train for, because the height difference was a little different for me. I had to bring in sparring partners who were aggressive and 6ft 2in and up. I knew how he was going to come; I’ve seen him fight before and I knew he wasn’t’ going to switch it up that much. I was lucky. I was able to get Jamontay Clark, he’s pretty tall, and he’s one of the top guys at 154 so for him to put his pride aside and just come and work with me in camp, I appreciated that.”

There was also a 6ft 6in sparring partner in Vegas, where Lubin worked with coach Kevin Cunningham and Erickson said: “The training was special. It was what it was supposed to be.”

But the injuries took their toll during the battle and enough was, eventually, enough. While others said it showed how much heart and courage Lubin had, he always felt he had what was required when the going got rough.

“I knew I had what it takes from the beginning,” Lubin insisted. “I’ve been in wars before, and in amateur fights… I’m damn sure tested, but I don’t really go for the Fight of the Year stuff, that means both fighters were getting a beating, or it was a back-and-forth type fight. I like my fights to be more one-sided.”

He talks about the art of boxing, hitting and not getting hit, but he’s keen for another go-round with Fundora.

“Maybe I underestimated him a little bit,” he added. “But I was just trying to get that back [after being knocked down], then my shoulder went I couldn’t throw the jab anymore.”

The right hook was the only shot he could throw without pain, and he needed to get inside to do it, and arguably that played into the hands of the tall volume puncher opposite him. But Lubin gives Fundora his props. “Big ups to him, he won the fight but we’ll do it again,” he said.

Lubin’s lofty expectations of himself are far from realised. He thought he’d be a multi-title holder by now but he remains steadfast in the belief that he will get there, and that he will figure prominently when they talk about the best fighters in the sport.

“Of course, that’s what I’m aiming for,” he went on. “That’s what I’m shooting for, and it’ll come, when they start talking about me on the pound for pound list.”

Lubin is ranked No. 5 by The Ring at junior-middleweight and is now 24-2 (17). He’s spending time with his two children at home in Florida and rehabbing his shoulder. Within a couple of months, he should be able to announce his return to the ring and the PBC fighter wants to come back at a high level.

“I don’t plan on slowing down,” Lubin concluded. “I plan on getting right back into the mix of things and fighting the best guys. I’m not looking for any tune up guys or nothing like that.”